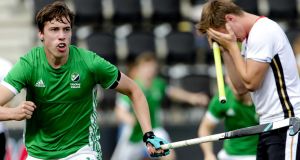 Seán Murray’s glorious 48th-minute touch earned Ireland a first ever result against Germany in a world ranking competition as they tied 1-1 in their opening European Championships tie in Amsterdam.

Murray latched onto Matthew Nelson’s reverse-stick cross at the back post, cancelling out Lukas Windfeder’s first-half drag-flick, much to the delight of 7,500 mainly Dutch fans keen to see a German downfall.

Indeed, it might have been even better for the Green Machine but for the brilliance of Tobias Walter, who denied a Shane O’Donoghue drag-flick in the closing 10 minutes as well as a pair of Alan Sothern first-half efforts.

As is so often the case, there was a fraught final minute with Germany twice going for video reviews for penalty corners in the last six seconds. David Harte kept out the first set piece while a second was somehow blocked by Paul Gleghorne – the video came back inconclusive as to whether it was fair means or foul – to signal the end of the tie.

Coach Craig Fulton praised the defender for going where few would dare, saying “he’s made a career on that”.

Fulton added it is important to bring the momentum into Monday’s date with Poland. Nonetheless, he was pleased to reflect on a result against the Olympic bronze medallists, especially having made six changes to the panel that earned World Cup qualification last month.

“There’s a lot of competition to get into this team and they know they have to be on the money.

“We are definitely making up the gap [to the world’s top six]. We could have won that game in the last 15 minutes but also could have lost it on the hooter!”