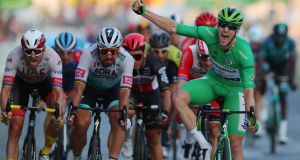 Sam Bennett celebrates winning the final stage of the Tour de France, and with it the green jersey. Photograph: Thibault Camus/Getty/AFP

All he had to do was stay upright on his bike until the finish line, and instead Sam Bennett was first across it - his right arm already aloft after one of the most magnificent final stage victories in Tour de France history.

In the past only four riders had managed to win the final stage Champs-Élysées while wearing the green jersey, and Bennett now joins that properly elite group, holding back none of his absolute delight after finishing the perfect bike length ahead of reigning World champion Mads Pederson from Denmark, his closest rival for the green jersey Peter Sagan from Slovakia in third.

So after three weeks, 21 stages, 58,000m of climbing and 3,482km of road, unquestionably among the hardest Tours in history, probably one of the best, the race reached Paris on Sunday evening, two months later than originally planned, it finished with an Irish rider winning the green jersey for the first time since Seán Kelly last won it outright here 31 years ago.

“I can’t tell you how excited I am, the green jersey, the Champs-Élysées, the world championships of sprinting, I never thought I ever be able to win this stage, and to do it in green is so special, and for my dream team, Deceuninck-Quick-Step. The way the boys rode all, they were fantastic, it’s just such an amazing feeling.

“Yeah, all that suffering during the mountains, so worth it now. All the years trying to come up, trying to make it, it took me so long to get here, I’m just going to enjoy every moment of it.”

It was as if Bennett had held everything perfectly back for his final sprint, and although holding back the tears this time, there was no disguising his pride either; winning the final sprint in green was also a feat Sagan nor indeed Kelly could manage.

Bennett had repeatedly said he spent the last three weeks trying not to think about it, and when it actually happened Bennett admitted too it has surpassed his own expectations.

“I’m still not trying to take it all in, because I get too emotional. It’s been amazing, and definitely a tear in my eye entering the Champs-Élysées All the support from home too has been amazing.

“So yeah, super proud, a very special moment in my career. I can’t compare this green jersey race to other years, because I wasn’t in it, I knew it was going to be hard, but I didn’t fully understand what’s involved. You’re racing some stages against pure sprinters, racing guys for the points jersey, so you’re almost involved in two races. Then trying to get in the breakaway, or watching the right riders, then the intermediates, the bunch sprints, every day there is work to be done, so many people to watch. So I was a very hard thing to do, might be my only chance to ever do it, so pretty proud of it.

“But this is about the team too, I can’t thank them enough, they got me through the mountains, the intermediate sprints, helped me control the points jersey on and off the bike, they’ve been absolutely fantastic. I definitely wouldn’t be standing here in green without them.

“It’s funny, because as kid, I was watching the Tour, and thought ‘that’s easy, I could do that’, but when I first got here it was a lot harder than I thought it was going to be. It has been one of the harder grand tours I’ve done. Speaking to guys in the bunch, it has been one of the hardest anyone has done. But this last stage on the Champs-Élysées, with all the different camera angles, has always been something special.”

Sunday’s final stage left only 122km to ride, less than half of that to Paris, then eight laps of the Champs-Elysées - Bennett already perfectly dressed up in green and riding a custom-painted green Specialized racing bike.

The last intermediate sprint, with 20 points for the winner, was decided after the third of eight laps down and around the 2km long Champs-Élysées, and Bennett took 11 points in fifth place, pushing his 66 points clear of Sagan at that stage. Winning another 50 points for the stage win, Bennett finished with a grand total of 380 points to Sagan’s 284, the third-placed Italian Matteo Trentin on 260.

It’s proved one of the more memorable races in Tour history for a variety of reasons too, not least Bennett’s breaking the grip on the green jersey won in the last seven Tours that he finished by Sagan. Indeed that green jersey, which Bennett first wore on stage 5 and stage 6, won back on stage 10, then held for the last 11 stages - has arguably been the hardest-fought battle for that prize too in recent years.

Tadej Pogacar will wake up on Monday, his 22nd birthday, as the youngest winner of the race in post-war history. That was after a dramatic change in the final battle for the maillot jaune in Saturday’s time trial between two Slovenians who had been so close throughout the three weeks of the Tour. Primoz Roglic (Jumbo-Visma), known for his prowess against the clock, conceded the 57-second lead he held over his compatriot Pogacar (UAE Team Emirates), who became the first Slovenian Tour winner when the race reaches Paris.

Pogacar, who won the time trial outright with his time of 55 minutes and 55 seconds, finished the stage one minute and 56 seconds ahead of Roglic, who had worn yellow for the last two weeks and was considered virtually certain to win, but Pogacar takes the race by 59 seconds.

Bennett’s special place in Tour history was already twofold: only the sixth Irish rider in the 107 editions of the race to win a stage, Bennett also became only the second Irish rider, after Shay Elliott, to win a stage in all three Grand Tours - having already won three in the 2018 Giro d’Italia, and two stages in the 2019 Vuelta a España.