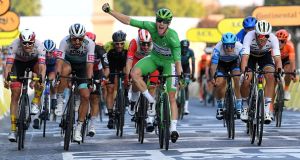 Sam Bennett finished the Tour de France as only the fifth rider since the race first started finishing on the Champs-Élysées to win the last stage while also wearing the green jersey. File photograph: Getty Images

Already back in the thick of the bunch sprints and now poised for several more, Sam Bennett has confirmed his participation in his second Grand Tour of the season and will start next week’s Vuelta a España as part of the eight-man Deceuninck-Quick-Step team.

It will be the first time Bennett has ridden in two Grand Tours in the same season. He last took part in the Vuelta in 2019, where he won two sprint stages and also finished second in the final stage in Madrid.

His participation was announced on Wednesday morning ahead of the 108th Scheldeprijs, the 174km one-day Classic from Schoten to Schoten in Belgium, where Bennett got perhaps a timely reminder of the thrills and spills of the bunch sprint, narrowly avoiding a nasty crash inside the final 200 metres which left a couple of riders in need of medical attention after hitting the road worryingly hard. The organisers are still awaiting a further update on their condition.

Bennett appeared poised to launch his final sprint for the line, only for his Deceuninck-Quick-Step lead-out train to run a little short on steam, and instead he found himself squeezed out of a leading quintet, as the Australian Celeb Ewan from Lotto Soudal broke free from the front to take the win.

For Bennett, who turns 30 on Friday, the focus now switches to the slightly shortened Vuelta next Tuesday, which like the Giro d’Italia currently underway will face added crowd restrictions around Covid-19, and indeed some uncertainty whether or not all teams and riders will actually finish.

“Delighted to get the call up for La Vuelta,” Bennett said on Twitter. “This will be my first time doing two Grand Tours in one season, it will be great to push my limits and see what I’m capable of.”

There was already speculation he would then move on to the Spanish event, despite the gruelling nature of this year’s Tour which finished just three and a half weeks ago. Bennett finished that race as only the fifth rider in Tour history to win the last stage while also wearing the green jersey since the race first started finishing on the Champs-Élysées in 1975. After three weeks of racing, 58,000m of climbing and 3,482km of road, he came away with two outright stage victories and finished six times in the top five.

With that he also bridged the 31-year gap since Seán Kelly last won green in Paris; Kelly also won the Vuelta outright in 1988, and also collected the points jersey that year which Bennett may well find himself chasing again. Kelly also won the points classification in Spain in 1986, 1985, and 1980.

The 75th edition of the Vuelta was originally scheduled to take place from August 14th to September 6th, with the first three stages due to be held in the Netherlands, starting in Utrecht. However the Covid-19 restrictions forced its postponement along with the Tour de France and the Giro d’Italia, and for the first time since 1985, the race will not be 21 stages long, but held in a reduced format over 18 stages.

For the first time since 1961 it will also depart from the Basque Country, starting in Irun next Tuesday, and finishing in Madrid on November 8th. Though like the Tour and the Giro, currently taking place, it is not entirely guaranteed it will make it to the finish, depending on how it copes with the restrictions and prevalence of Covid-19.

The course will be tilted towards the climbers (with Tourmalet and Angliru just two of the highlights) but also the sprinters and puncheurs will have their chances to shine at the race which this year will have 18 stages.

It means Bennett will make his second consecutive appearance at La Vuelta, where he’ll be supported by a strong lead-out train featuring New Zealand champion Shane Archbold, Michael Mørkøv and Zdenek Stybar, a stage winner at the race in 2013.

Also in the team will be Mattia Cattaneo, the soon to be 30-year-old Italian who is set to return to racing for the first time since his injury at the Giro dell’Emilia, two months ago. The eight-man squad will also feature three young riders who will make their Grand Tour debut: Andrea Bagioli, a stage victor at this year’s Tour de l’Ain and Settimana Internazionale Coppi e Bartali, as well as US ITT champion Ian Garrison, and Tour of Slovakia winner Jannik Steimle.