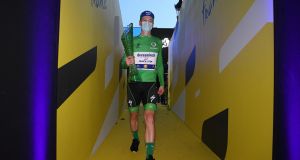 Sam Bennett may be tiring a little of all the Seán Kelly comparisons, only this one is bang on cue.

Because three weeks after winning the green jersey in the Tour de France, the first Irish rider to do so since Kelly in 1989, Bennett will next ride at Sunday’s Gent-Wevelgem classic in Belgium – a race in which Kelly was also the last Irish rider to win, back in 1988.

It is a different sort of challenge for the Carrick-on-Suir rider. Gent-Wevelgem, first staged in 1934, is considered one of the pure classics, the Flanders Fields route featuring the famed climb of the Kemmelberg plus the Plugstreets gravel sections. It is also, for the first time in its race history, being staged in the autumn instead of spring.

Bennett does have the experience of the 2017 race, where he finished 17th. That edition was won by Olympic road race champion and local favourite Greg Van Avermaet, with Peter Sagan from Slovakia in third. Two years ago it was Sagan who won while last year Alexander Kristoff of Norway took the title.

Indeed recent editions have come down to the pure sprinters, Sunday’s slightly shortened course due to Covid-19 toying further with that. Starting at Ypres under the Menin Gate, this year’s 232km race won’t enter France, as it usually would, the precise route not yet revealed to encourage spectators to follow on television (including Eurosport).

Bennett will have a strong team to back him (including Yves Lampaert and Bob Jungels) and after Gent-Wevelgem he will move on to ride Wednesday’s 108th Scheldeprijs, the 170km one-day race from Terneuzen to Schoten, which is two days before his 30th birthday.

Although not originally part of his plans, Bennett hasn’t yet been completely ruled out of the Vuelta a España, which starts on October 20th. Team Jumbo-Visma on Wednesday confirmed Primoz Roglic from Slovenia will defend his title after all.