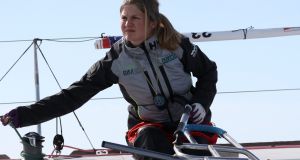 Mayo’s Joan Mulloy on Spirit of Grace/BusinessPost.ie in 41st place with just the final stage remaining in the Solitaire du Figaro in France.

Blink and it’s over. Well, almost, as the records tumbled for the 280-nautical mile Volvo Dún Laoghaire to Dingle Race that enjoyed near perfect wind conditions from the outset to just short of the finishing line.

Overall victory for Paul O’Higgins’ Rockabill VI from the Royal Irish Yacht Club meant a second early season success as it comes soon after his win in the ICRA Division One national title the previous week.

There was a record number of starters at 41 boats also a record low number of retirements with just two boats pulling out.

And the largest ever entry also broke the course record, shaving just 24 seconds off the one set by by Mick Cotter’s Windfall though it narrowly avoided the elusive sub-24 hours time by less than one hour.

As the race now counts under the Royal Ocean Racing Club’s calendar and acts as a prelude to the 605-nautical mile Rolex Fastnet Race in August, offshore racing is cementing its return to popularity.

Interest levels augur well for next Summer’s 704-mile Round Ireland Race as well.

The addition of a two-handed mixed offshore event for the Paris 2024 Olympics is further evidence that this department of the sport is aligning with traditional inshore racing.

Irish prospects for those games in five years’ time are keeping their powder dry but the expected format of the event – depending on the equipment announcement due later this year – will probably not be too distant from the current Solitaire du Figaro race now approaching its concluding stage in France.

That France dominates this type of sailing is a given but it is the strength of their solo sailing “schools” along the coast of Brittany that means any serious challenger will need to follow the training regime established here.

That gives rise to speculation about Ireland’s two competitors in the current Solitaire who are both based in France and diligently serving their time in the 48-boat fleet.

Meath sailor Tom Dolan on Smurfit Kappa recovered from hitting rocks on the third leg to finish a creditable eighth place for the stage but was later penalised one hour for using his engine to get himself out of danger.

“That’s the maddest thing I have ever been through,” Dolan said after finishing. “There was no wind at the coast and I managed to skip around them [the fleet] and get into the top 10 and then I got all excited saying, ‘I am doing well, I am doing well.’”

Dolan’s previous best was in the same third stage last year when he placed ninth and he is currently placed 17th overall.

Also competing is Mayo’s Joan Mulloy on Believe in Grace/BusinessPost.ie in 41st place with just the final stage remaining. While also committed to the French system, she was late to practice with the new Figaro 3 class of boat used for this edition that is foil assisted.

Meanwhile, the “D2D” race also served as a feeder race to the south coast ahead of next week’s O’Leary Life Sovereign’s Cup regatta at Kinsale Yacht Club where the latest entry tally stands at 95 boats.

The fleet includes the regular IRC rated cruiser racers and will have Anthony Gore-Grimes Dux from Howth Yacht Club as overall winner of the recent ICRA National Championships sailing plus three other title winners.

A strong turnout of 17 Dragon one-designs will also be in action heralding a drive towards next Summer’s Gold Cup that returns to Kinsale.

Nevertheless, despite strong turnouts already this season plus the prospect of a 500-boat Volvo Dun Laoghaire Regatta in mid-July, the Irish sailing calendar has returned to the crowded fixtures and front-loading of events at the start of the season to the annoyance of organisers and competitors alike.