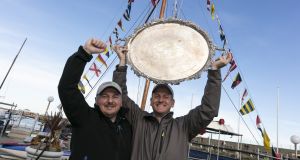 Due to 30 knot gusts on Dublin Bay, the final round was sailed inside the pier walls over a short course of around 20 minutes with O’Connor and his crew Davy Taylor winning two of the four final races.

An earlier sixth place was discarded by O’Connor and the fourth race brought the series down to the wire with constant pressure from Bangor’s Robert Espey of the RS400 class racing with Beijing Olympian Stephen Milne.

A total of 16 national champions or prominent top sailors were nominated to the event hosted by the National Yacht Club and sailed in a fleet of loaned two-person Flying 15 keelboats that recently finished a two-week world championships on Dublin Bay.

Defending 2018 champion Peter Kennedy fell victim to a limitation of the event format on Saturday when his loaned boat broke during the starting sequence of his first race and both reserve boats had already been called into service.

In the final analysis, expectations that Flying 15 sailors would dominate the event sailed in their own class and on mostly home waters were wide of the mark.

Yet the format of the event certainly favoured small boat sailors and not for the first time either.

O’Connor was nominated by the SB20 class as was Kennedy in 2018 and while the defender graciously accepted being ruled out of the competition by the gear failure issue, a showdown between the eventual winner and the defender, both hailing from the same class would have been a spectacle in itself.

Perhaps Irish Sailing might yet consider offering Kennedy a wildcard place in the 2020 event for the prospect of a sail-off between him and O’Connor.

But Espey and Milne were worthy adversaries ahead of a bunch of other contenders who could easily have been in the frame for a win and the event was decided on a one-point difference between first and second place.

Even here, the small boat advantage shows through as Espey was sailing for the RS400 class while former GP14 world champion Shane McCarthy from Greystones Sailing Club with Shane Boyle crewing placed third.

Formerly known as the Helmsman’s Championship of Ireland, the event stays true to its roots with the Irish Dinghy Racing Association that went on to become the Irish Yachting Association and most recently Irish Sailing.

That heritage helps explain the weighting towards small boat sailors and the championship as a test of a helm’s skills. Where the format falls short, possibly, is that a significant proportion of the sport comprises cruiser-racing and those sailors don’t feature as highly in the results.

While the Irish Cruiser Racing Association is eligible to provide its class champions or equivalent nominees to the All-Irelands, this year neither ICRA representative progressed into the final eight places.

Next year’s championship is already slated to be held at the Royal Cork Yacht Club which itself will be ‘en fete’ for its 300th anniversary and the National 18 class will be the boat of choice.

But perhaps, sometime in the future, consideration might be given to staging the event under IRC handicap or similar system, even once or perhaps every three or four years to see how sailing the event in bigger boats affects the results.

Given that many big boat sailors find their way into cruiser racers from small boats anyway, it could prove to be a fully representative format of the complete sport.