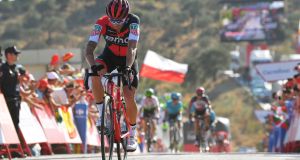 Nicolas Roche missed a split on stage six of the Vuelta a España on Thursday, with the first 50 riders gaining one minute 44 seconds on Roche’s group.

Meanwhile Conor Dunne and Eddie Dunbar were left reeling this week when the Irish Aqua Blue Sport pro team collapsed. The team had been under financial pressure this year despite stating last year that there was enough funding for four years.

The team management were aiming to merge with another squad but talks fell through, prompting the announcement that it was going to stop.

Dunbar won the Irish Road Race Championships in June and was given a new two-year contract. He told the Irish Times that the sudden team collapse meant that he doesn’t know if he will have enough time to find a replacement team for 2019.

“Right now I am just fighting really hard to stay in the pro peloton,” he said. “Just to try and get something on the table and then weigh up things once I know more. There is just so much in the unknown right now.

He said that although his disappointment at the news plus his uncertainty about securing a replacement so late in the year made him consider a completely new direction – something which would be possible after securing a 2.1 degree in philosophy and psychology – he believes he has more to show in the sport.

“I’ve got the national champion’s jersey. I have still got nine months in that. It would be such a shame to let that go to waste and not ride in it. I want to show the jersey off.”

Dunbar is one of the most promising young riders in the sport. He is a past winner of the U- 23 Tour of Flanders and was second on the final stage of the recent Tour de l’Avenir. It is expected that he won’t have issues finding a new squad.

1 Keith Duggan: Liverpool’s charming man casting a shadow over Guardiola
2 TV View: Roy Keane but Daragh’s keener as Late Late fails to shoot the lights out
3 Matt Williams: Ireland will need to step up on Wales display to prevail at Twickers
4 England v Ireland preview: Ireland’s revival to face its sternest test
5 Alex Corbisiero recalls Twickenham 2012: ‘We were like sharks in the water’
Real news has value SUBSCRIBE