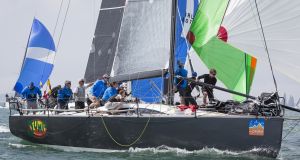 Irish Sailing has been on something of a rollercoaster ride over the past week, leaving very little doubt that the “off-season” is very much on.

Just a week ago over 400 guests attended the Volvo Irish Sailing Awards at the RDS concert hall in Dublin, where Howth’s Conor Fogerty was announced as the Sailor of the Year in recognition of his single-handed transatlantic race triumph last June.

His was one of more than a dozen achievements highlighted throughout the year under the Afloat magazine awards scheme that included some moving accounts of rescue and bravery.

Within days of the awards ceremony however, the national authority released an independent report into last year’s high-profile incident in Dún Laoghaire Harbour.

According to the preamble, “in October 2017 the Irish Sailing performance optimist squad were training in Dún Laoghaire harbour. Early into this coaching session, winds significantly changed direction and gusts increased in strength, as the southwestern edge of Storm Brian’s eye-wall approached, resulting in a number of boats being abandoned and damaged.

“While no sailors were harmed, the incident raised questions around the policies, processes and procedures of Irish Sailing’s performance coaching programmes that are now undergoing a thorough review.”

The report is only concerned with the optimist squad, and does not address the other serious incident that occurred in the western end of the harbour at the same time.

The report details in great depth the circumstances that thankfully averted any injury or loss of life, though it could so easily have been different. For this reason it makes for grim reading.

No direct fault is found, and while Irish Sailing is, in essence saying “mea culpa” for a failure in policies and inadequate health and safety procedures, also contained within the report is a clear message that there is a wider problem within the sport at many levels.

While there are plenty of best practice examples at clubs and centres around the country, poor planning, inadequate maintenance and lack of resources are just as commonplace. The report that is available on Irish Sailing’s website will be a useful starting point for addressing the problem.

The rollercoaster ride continued this week with news of the latest twist in the Irish Cruiser Racing Association (ICRA) saga. In the aftermath of last month’s strategy symposium and cancellation of the annual conference this month, the full executive board has resigned and an extraordinary general meeting has been called for Wednesday, March 21st, 2018, in the Maldron Hotel, Portlaoise, at 7.30pm to ratify an interim constitution and elect a new board.

On a happier note, organisers at Volvo Cork Week have reported a surge of interest in the July’s regatta, with half the 2016 turnout already confirmed thanks in part to early-entry incentives such as discounts and a draw for entry refunds as well as a competition for Helly Hansen gift packs.

Howth Yacht Club’s inaugural Wave Regatta on the June Bank Holiday weekend is also reporting more entries, with Jamie McWilliam’s Hong Kong team on Signal8, a Ker 40-footer, entered along with Crosshaven’s Conor Phelan on Jump Juice. Dún Laoghaire’s Paul O’Higgins on Rockabill VI will be racing, and Ronan Harris is the first of the J109 fleet to enter with Jigamaree.