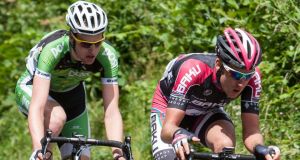 Conor Dunne of An Post Chain Reaction (left) failed to cross into to top group in the first stage of An Post Rás. Photograph: Ciaran Fallon/Inpho.

Winning a two-man sprint to the line in Carlow, Italian rider Francesco Reda grabbed the first yellow jersey of this year’s An Post Rás when he beat breakaway companion Lukas Postlberger (Tirol Cycling Team) at the end of Sunday’s 154.4 kilometre opening stage.

The duo were part of a 15-man breakaway which got a gap just over 20 kilometres after the start in Dunboyne and were never seen again by the main bunch.

Various riders, including last year’s overall winner Clemens Fankhauser (Hrinkow Advarics Cycleangteam) and Irishman Conor Dunne (An Post Chain Reaction) tried to get across, but were unable to do so.

Irvine was focused after his recent win in the Shay Elliott Memorial and took a total of six bonus seconds when he won the intermediate sprints at Naas (km 28.7) and Clonegal (km 120.8).

However his chance of ending the day in yellow evaporated when Reda and Postlberger broke clear with over 30 kilometres remaining. They were first and second at the sprint in Ballon (km 132.5) and continued on to the finish, where Reda was quickest in the gallop.