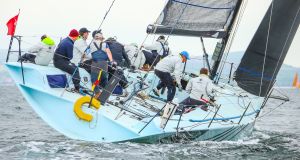 The Irish Sea’s strongest Class One IRC fleet of the year is assembling for the Volvo Dún Laoghaire Regatta (VDLR) in three months, where a record combined fleet of 500 boats is expected for Ireland’s biggest sailing event.

The four-day sailfest was launched in buoyant style on Thursday night at the National Maritime Museum by local Dún Laoghaire Minister Mary Mitchell O’Connor, with the news that 410 boats are already secured as early entries 100 days before the first gun on July 11th.

10 Kazuo Ishiguro: ‘I have to be careful to guard against genius syndrome’

11 Covid-19: Ireland could be ‘close to normal’ by end of year, says Dr Ronan Glynn

18 How many masks should you wear while out and about this weekend?

19 Relax, boomer: Gen Z and the millennials have turned on one another

23 Moses Farrow: ‘I felt inherently like I was a bad kid. The abuse at home reinforced that’

24 North’s status under Belfast Agreement is an inconvenient truth

28 ‘Ireland is a great country, but we can’t help ourselves being nasty to people sometimes’

33 Meet Pádraig, former J1 student, whose robotic exoskeleton has given him new hope

34 All vaxxed up with no place to go, Londoners start to unwind the lockdown

38 ‘The Art of War’: As relevant now as when it was written

39 Public support for lockdown will nose dive once vulnerable vaccinated