Railway Union and YMCA provide the surprises in men’s hockey 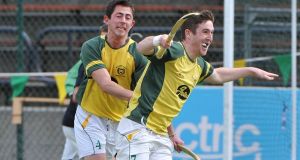 Railway Union’s Mark English (right): he was on the mark in the second half against Banbridge. Photograph: INPHO

Railway Union and YMCA made seismic waves in the Irish Senior Cup with the elimination of reigning champions Banbridge and higher-tiered Annadale respectively to reach the quarter-finals.

Just two months ago Railway were hammered 6-1 on home turf by Bann but they produced a fine second-half showing to see off the Co Down side 3-1.

Eugene Magee and Nick Tate exchanged drag-flicks in the first half to leave the tie locked at one each before the break. Then Mark English and Simon McKeever struck in the second half to earn Railway a famous win against a Bann side fielding South African provincial player Brad Logan for the first time.

Their Australian connection was in fine form with Thom Ritchie netting twice while Southern Hemisphere arrival Jacob Webber scored along with Felim Kelly and Ben Campbell.

In general it was a fine day for Leinster sides with six going through to the quarter-finals, while just one side apiece from Ulster and Munster remain. Glenanne went the distance against Mossley, prevailing in a shoot-out after normal time had ended 3-3. Three Rock Rovers got the best of Cookstown 3-1, while Pembroke eased to a 9-1 success against South Antrim.

Monkstown had a similarly easy 6-1 win in Cork against UCC. Cork C of I bounced back from three games without a win in the league with a confident 3-0 success over visiting Kilkeel, while Lisnagarvey beat Instonians by the same margin.