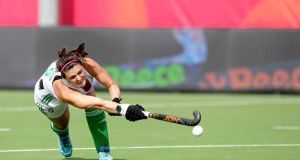 Róisín Upton scored from four penalty corners in the 11-0 win over Belarus in the EuroHockey Championship in Antwerp. Photograph: Frank Uijlenbroek/World Sport Pics

There was something very Australian about Ireland’s ruthless 11-0 hammering of Belarus as they showed no mercy to record their biggest ever EuroHockey Championship victory.

In times gone by, games against lower-ranked opponents have been real dirges, with Ireland struggling by with the maximum of fuss. Belarus gave Ireland a horrible fright in a 3-2 scoreline in the ultimately doomed 2013 campaign; two years ago, a flat performance against the Czech Republic should have seen Ireland relegated but for some divine intervention.

But this was a procession from the moment Róisín Upton clattered in the first of her four penalty corner goals. In total, Ireland converted nine out of 18 set pieces, romping home with nine second-half goals.

For Sean Dancer, in his first tournament as head coach, his Gold Coast roots raised him to never take the foot off the gas: “We play every game as hard as we can for every minute,” he said of the win. “That’s the philosophy I want to instil in the team and will keep pushing.”

It was a busy day for the coach who is keen to leave nothing to chance to see Ireland build on the World Cup success. His day started with carting 72 bottles of water from the local supermarket to the Wilrijkse Plein venue, struggling with the trolley over the Antwerp cobbles.

And he doesn’t feel anyone in the staff or team should be above mucking in like that.

“To me, it’s part of the team ethic. I certainly don’t have a hierarchy system. Being the coach doesn’t mean you are above doing things like that. Each situation is unique but I am happy to have every member of staff actively involved.”

After Upton’s opener, Anna O’Flanagan extended her tally at the head of the all-time scorers list with a close-range finish.

The second quarter saw a lull but six more goals came in the third with Nikki Evans on the mark twice on her international tournament comeback. O’Flanagan also got a double while Upton book-ended the score sheet with another rasping effort.

It means both the Irish men and women face Germany knowing win will earn a semi-final place. The men play on Tuesday, hoping they can finally find their form after a 5-1 loss to the Netherlands and 3-3 scramble against Scotland.

The women, meanwhile, are in action on Wednesday with a real buzz about the camp.

“It’s a challenge the girls are really looking forward to,” Dancer added. “England did a really good job blocking up the field on them; that shows there is a good way to get at Germany and we can hurt them from there. They will be tough but there is positive energy that we can put them under the pump.”