Rás Tailteann still seeking a new sponsor for the 2018 edition

Eimear Dignam takes up the role of race organiser 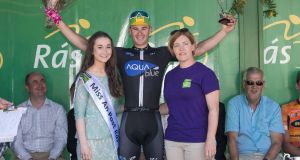 Having learned earlier this year that An Post was stepping away after many years of backing the race, the organisers of the Rás Tailteann have said that they are still seeking a new backer for the 2018 edition.

“We are still looking for a sponsor,” Eimear Dignam told the Irish Times on Thursday. “We have had talks with a couple of different prospective sponsors, but so far nothing has come from that.

“We are looking for title sponsors, but if we are not successful with that, we are happy with two or three sponsors to come in as a unit.”

The race has been a part of Irish sport since 1953 and is the biggest cycling event in the country. It is a world-ranked event on the UCI calendar and has played an important part in the development of many successful riders, including world champions such as Stephen Roche and Tony Martin.

It takes place in May of each year and with just six months until the 2018 edition, the pressure is on.

“Our main focus is to get the race on the road next year,” Dignam continued. “All the other plans are going forward – the logistics, the race organisation have been going ahead. We are working on the basis that we will have a sponsor, and want to have everything in place for that.”

She confirmed that talks are ongoing with companies at present, but also said that the race is open to approaches from other prospective backers.

Planning for the 2018 event had an unexpected complication in September when race director Tony Campbell stepped down. He said at the time he was doing so for personal reasons. Eimear Dignam is the daughter of the previous organiser Dermot Dignam, and the event has been part of the family life for decades.

She confirmed that she will have a key role in 2018. “Currently I am down as the race organiser, as we need a focal point,” she said. “It wasn’t something I envisaged doing, but somebody needed to step forward to fill the vacancy.”

An Post is facing a tough financial situation and announced this spring that it was exiting its backing of cycling. In addition to its Rás involvement, it was also a sponsor of the Rás na mBan international women’s race and the Sean Kelly team.

The latter recently said it would not be part of the peloton in 2018 due to an inability to secure a new backer, but it hopes to return the following season.