Roglic stuns Julian Alaphilippe by beating him on the finish line 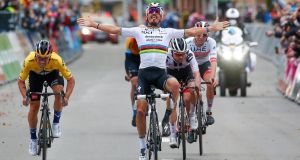 The emblematic race of attrition that is Liège-Bastogne-Liège produced one of the most dramatic finishes in its long history on Sunday when Primoz Roglic rode under the celebratory arms of Julian Alaphilippe to claim the victory on the line after 257km.

First run in 1892, the oldest of the five Monuments of the European calendar, it also provided some consolation for Roglic, two weeks after the Jumbo-Visma rider surrendered his lead in the Tour de France on the penultimate stage to fellow Slovenian Tadej Pogacar.

After winning a world title for France last week, Alaphilippe of Deceuninck-QuickStep looked and believed he had the victory, only for Roglic to pass from his right hand side and take the win after the last of the five-man breakaway approached the line.

Ireland’s Dan Martin, who won the race in 2013, and finished second in 2017, was among those to leave his final charge for victory just a little too late, finishing in 11th place in the group of 11 riders that finished just 14 seconds behind.

Indeed Alaphilippe was later judged to have diverted from his sprinting line, apparently to avoid Marc Hirschi of Sunweb, and the race officials then demoted him to fifth place; that meant Hirschi and Pogacar (UAE Emirates) were promoted to second and third respectively, with Matej Mohoric (Bahrain-McLaren), the last to join the final breakaway, taking fourth.

“It’s just unbelievable,” said Roglic. “It was so close. I just never stopped believing, and kept pushing until the last metres, actually the last centimeters. I’m super happy that I managed to win.

“It’s an incredible feeling. It was a really long period for me, three months away from home. I’m just super, super happy, and proud of the whole team and everyone. Finally, I managed to win something, eh!”