20 years after the lid was blown off cycling’s Pandora’s Box, have things changed? 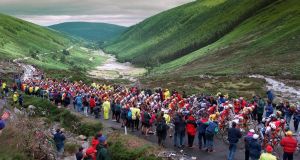 People sometimes ask me how long I’m at this game. Because there was no plan, except to get through the six-week trial and take whatever came after that, never once thinking this would be 20 years ago already.

It was the last week of June, 1998, the country under a mini heatwave and mildly distracted by the knockout stages of the World Cup. That and the arrival of the Tour de France, for three opening stages – also known as Le Tour en l’Irlande. And when you’re fresh out of a year in journalism school and coming to the end of that six-week trial on these sports pages that might just be the break you’re looking for.

Even before it started Le Tour en l’Irlande wasn’t without its critics. Then minister for trade and tourism Enda Kenny had to defend spending 2.4 million of our deal old punts to bring the race here in the first place, and additional costs and local authority expenditure soon trebled that amount.

The late Noel Carroll of the Dublin Chamber of Commerce wasn’t happy about the road closures in the city for the opening prologue, set for Saturday July 11th, and the tourist industry wasn’t impressed either when Eurosport announced they’d only be covering parts of the stages live. Some of those closer to the sport also hinted that doping was now rife in the peloton, especially the new and undetectable blood-boosting hormone EPO.

After the prologue, the two stages proper looked suitably inviting: the Dublin-Wicklow-Dublin stage on the Sunday, and the Enniscorthy-Cork stage on the Monday. The idea was to test-ride the routes, on my old Trek hybrid and with a neighbour for company, then write up a series of preview articles. L’équipe picked up on them too, as the French press began to arrive in Dublin on the Wednesday, July 8th.

That happened to be the same day Willy Voet, the Festina team soigneur, or masseur, set out from Brussels towards Calais, to take the ferry to Dublin for the start of the race. He was stopped by French police on the French-Belgian border, near Lille, and without being asked for any papers or identification was told to get out of the car.

In two cooler bags behind his seat, they found 234 doses of EPO, 80 flasks of human growth hormone, 160 capsules of testosterone, and 60 pills of Asaflow, a sort of highly-potent aspirin. And, later, stuffed down his underpants, a personal supply of Belgium pot, a mixture of amphetamines, caffeine, cocaine and/or heroin.

Just like that the lid was blown off cycling’s Pandora’s Box, Le Tour en l’Irlande forever being remembered as the Grand Départ for the Tour de Farce.

The French police waited until the race was back on home ground before moving in with further warrants, the story soon overtaking the glowing aftermath of France’s victory in the World Cup.

Voet, holed up in a police cell in Lille, hadn’t just spat in the soup, he’d pissed in it too.

“There was no point in holding out any longer,” Voet wrote, a year later, in Breaking the Chain, his still terrifying confessional into the exact extent of doping in the peloton.

“Drop by painful drop, they would have wrung the truth out of me.”

First, they arrested the Festina team manager Bruno Roussel after the Wednesday’s stage into Cholet, who also caved under interrogation. Suddenly my biology degree was more useful than anything I’d learned in that year in journalism school. By the end of the week the entire Festina team was kicked out, including the darling of the French, Richard Virenque, and Alex Zülle, one of the outright Tour favourites.

What happened next either changed everything or changed nothing at all, depending on who you listen to.

Only 96 riders, just over half of the 189 starters, made it to the finish in Paris, under a dark cloud of suspicion and unquiet protest. The Dutch team TVM had three riders arrested and four of the Spanish teams simply walked out.

Marco Pantini went on the win the race and six years later was found dead of a drug overdose. His name is still in the record books, even though eight of the top-10 in that 1998 Tour later admitted or were implicated in the use of banned substances.

Still the 1999 race was declared the Tour of Renewal and it was won by Lance Armstrong, the first of his five successive Tour wins. Zülle finished second.

Next Saturday at Ile de Noirmoutier, a small island off the Atlantic coast of France, Chris Froome will set out to win that record-equalling fifth Tour, under a dark cloud of suspicion and at least some unquiet protest as to why he’s even racing. He’s still unable to explain how, 10 months ago, he had twice the permitted amount of salbutamol racing through his system on the decisive Stage 18 of the Vuelta a España.

Voet, meanwhile, will still be watching from his home in the Hautes-Alpes in south-eastern France, where he lives alone aged 73.

Declared persona non grata by the Tour organisers, and given a 10-month suspension in the aftermath of the L’Affaire Festina, he never returned to cycling, driving a bus for several years before recently retiring after suffering a stroke.

He was asked by Belgian news agency L’Avenir about this year’s race and specifically about Froome, given Voet’s claims in Breaking the Chain that he could tell whether a rider was “loaded” or not by just looking at him.

“It’s harder to say,” Voet told them, given he’s only watching on TV, but “nevertheless I see performances that leave me sceptical”. Particularly given Froome’s riding position, which he described as “assis sur une choitte”, which depending on who you listen to can translate as “sitting on the shitter”.