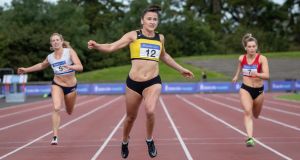 The problem with being Ireland’s fastest woman is that every time you race against Irish opposition you are expected to win. It’s not easy, and Phil Healy admitted as much after duly delivering the classic sprint double at the 148th running of the national track and field championships at Santry.

As the Irish record holder over the 100 and 200 metres, Healy already has a hold on these distances, although this was her first championship double – partly aided by the fact they were staged over two successive weekends.

So after winning the straight sprint last Sunday, the 25-year-old from Ballineen, Co Cork, added the bend to win the 200m this Sunday, her time of 23.57 seconds enough to hold off Sarah Lavin from Limerick club Emerald AC, who won the silver medal in 23.74.

Normally a sprint hurdles specialist, Lavin also won silver in the 100m last week, marking another step forward after a season almost wiped out by an ankle injury back in February. For Healy, wearing number 12, this was also her 12 national title in all, her fourth in succession over 200m, having also tied in the 100m final back in 2014.

“Close enough, the same as last week,” Healy admitted, her championship preparations not running entirely smoothly, and not just because of the lockdown: she also dislocated her shoulder in her home gym back in April, her coach Shane McCormack delicately putting in back into place after some local medical advice.

“I knew Sarah was going to push me all the way to the line, she’s a phenomenal athlete. Especially coming back from the injury that she had in February. I’m just really happy to come again and take the title on top of the 100m last week. I knew I had the strength too, having done some 400m work as well, but it was a fight the line, that’s what athlete’s want.

“And it’s just great to have the opportunity to race again, because without these championships, I probably wouldn’t have raced. So a few weeks off now, and then back into the winter training.”

Sean Tobin might well have completed the second half of an unprecedented double when he won a first national title over 10,000m, having lost out on another 1,500m title last Sunday when he was run down and beaten on the line by Paul Robinson, to win in 3:43.90, with Tobin, the Clonmel AC runner, clocking 3:43.92.

Tobin put himself in front again from five laps out and this time held on, winning in 29:35.14, with Eric Keogh from Donore Harriers producing a super strong fast lap to close up and take second in 29:36.21, dashing past Hugh Armstrong from Ballina AC in the process, who took third in 29:39.74.

After Athletics Ireland rejected an appeal from triple European medal winner Mark English against their own ruling which excluded him from running, his race entry denied to the additional self-isolation requirements being imposed by Athletics Ireland, the way was cleared for Harry Purcell to win tactical in 1:52.49, ahead of Longford teenager Cian McPhilips (1:52.78) and Louis O’Loughlin from Donore Harriers (1:53.83).

For Purcell, who has also come through the famed Villanova University, it was no less deserving and celebrated win, especially given his injury woes of recent years. “This has been a long time coming, lots of injuries, lots of upsets, a lot of questioning my ability, this is class,” said the athlete from Trim AC.

European Under-23 800m bronze medal winner Nadia Power was also denied entry by Athletics Ireland after twice racing in “green list” country Finland earlier this month. Again it was a no less deserving win for Iseult O’Donnell from Raheny Shamrock, who took the title in 2:09.13, ahead of Amy O’Donoghue from Emerald (2:09.99) and Claire Mooney from Naas (2:10.53).

This not only denied O’Donoghue, who won the 1,500m last Sunday, the classic middle distance double, but reversed the result in the process given O’Donnell, coached by Feidhlim Kelly at the increasingly successful Dublin Track Club, took silver in that race last weekend.

Ger O’Donnell from Carrick-on-Shannon continued his model of high hurdle consistency to win a fourth successive 110m hurdles title in 13.96, while Michelle Finn (Leevale) won her second title of the championships when winning the women’s 3,000m steeplechase comfortably in 9:59.72, having taken the 5,000m last weekend.

Other weekend highlights saw Niamh Fogarty from Raheny Shamrock win her third senior women’s discus title, with a best of 49.46m, while Sarah Buggy from St Abban’s AC underlined her dominance in the women’s triple jump winning her fifth straight title with 12.97m. This added to the gold Buggy won last week in the long jump, her 13th national senior title in all.

Kate Veale from west Waterford also won her 12th National title in winning the women’s 5,000m race walk taking gold in 24:51.49, while Callum Wilkinson (Togher) was a commanding winner of the men’s 10,000m race walk in 39:52.05 from training partners David Kenny (Farranfore/Maine Valley) in 41:38.45 and Brendan Boyce (Finn Valley) in 42:19.19.89 – a clean sweep of the podium for coach Robert Heffernan’s team. Colin Quirke from Crusaders, back home from the US, won the men’s discus with a best throw of 55.50m.