Archive Video: Pat Hickey is arrested at the luxury Hotel Windsor Marapendi where most of the International Olympic Committee (IOC) delegates stayed during the games. 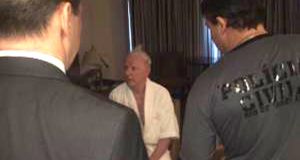 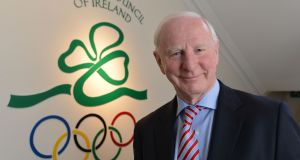 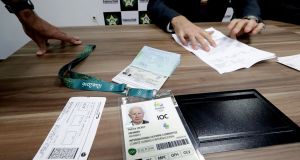 Pat Hickey has temporarily stepped aside as Olympic Council of Ireland (OCI) president after being arrested over his alleged involvement in the Rio Games ticket controversy.

Mr Hickey was detained at his hotel in the Barra da Tijuca neighbourhood of Rio de Janeiro on Wednesday on foot of a warrant from the same court that ordered the detention of Irishman Kevin Mallon on August 5th.

Police say they have evidence that Mr Hickey was part of the scheme that saw OCI tickets for the games in the hands of THG, the British company of which Mr Mallon was a director.

He faces charges of supplying tickets for the purpose of ticket touting, false marketing and diverting tickets to illegal purposes. He could be sentenced to up to seven years in prison if convicted of the three charges. However, custodial sentences are rare in ticket touting cases in Brazil.

He was arrested at the luxury Hotel Windsor Marapendi where most of the International Olympic Committee (IOC) delegates are staying during the games.

At a press conference on Wednesday, police said they knocked on the door of a room on the eighth floor of the hotel and Mr Hickey’s wife answered the door.

The officers said she told them Mr Hickey had left for Ireland. However, his clothes, shoes, Olympic accreditation and passport were still there.

Police said they were concerned Mr Hickey may have learned about the arrest warrant and might try to flee, so a search of the entire hotel was ordered.

Armed officers surrounded the building and police discovered the room beside Mr Hickey’s was reserved in the name of one of his relatives. It was there they found him wearing just a dressing gown and he was arrested.

“He was quite frightened so we called the hotel’s doctor as a precaution. The doctor said his blood pressure was regular but he was shook up. Because he has a previous history of heart problems he was taken to hospital,” said Ricardo Barbosa, the police officer leading the investigation.

Mr Hickey remained at the Samaritano hospital under police guard on Wednesday afternoon but was due to be brought to a police station for questioning once he is released.

In a statement on its website, the OCI said it was “aware of the media stories regarding Pat Hickey and we are seeking total clarity on the situation before we comment further”.

Police say tickets seized from Mr Mallon were from the quota destined for OCI executives, athletes, families and sponsors and should not have been sold to the general public without advising the Rio organising committee which is in charge of ticketing.

The OCI said Mr Hickey had, contrary to reports, complied fully with the terms of the arrest warrant.

“Mr Hickey was taken ill as this warrant was served and was taken to hospital as a precautionary measure,” it said.

“In light of this morning’s developments and his ill health, Mr Hickey has taken the decision to step aside temporarily as President of the OCI and all other Olympic functions (IOC member in Ireland, EOC President, ANOC Vice President) until this matter is fully resolved. Mr Hickey will of course continue to cooperate and assist with all ongoing enquiries.”

Police said they had seized computers and phones belonging to Mr Hickey. They said they found an exchange of emails between Mr Hickey and Marcus Evans, the British businessman who is the owner of THG Sports, sent during the games.

THG’s Dublin finance director Kevin Mallon has been charged with ticket touting. He was in the possession of 823 tickets which police have confirmed were all from the OCI or its authorised ticket vendor Pro10. THG is not authorised to sell Olympic tickets.

Police said more analysis would be needed of the emails before revealing the nature of their content.

They also confirmed the OCI had nominated THG to be its authorised vendor for the Rio Olympics. Police say that organisers rejected the application because of the company’s history of irregular selling of tickets at other major sports events.

Mr Barbosa said police now believe that Pro10 which was set up last year was used by the OCI as a “bridge” to get its tickets to THG despite the latter’s application to be an official vendor being rejected by Rio organisers.

“The objective here was profit,” said Mr Barbosa. “Pro10 as a new company did not have the experience to sell tickets for an event of this size.”

He said further investigation would be required to establish if the OCI was a beneficiary of the alleged scheme.

Police said arrest warrents have also been issued for three directors of Pro10.

In a statement, Pro10 said it utterly rejected any insinuation that it had been “involved in selling tickets at inflated prices, ticket ‘touting’ or ‘scalping’. We abhor such practices.

“We will vigourously defend our reputation and will contest fully any of these unsubstantiated and false allegations. We are already taking legal advice on how we deal with these unfounded allegations. “

Mr Barbosa also said more than 20 tickets in Mr Mallon’s possession were for the exclusive use of the OCI delegation and should not have been available for sale by Pro10 as the Rio organising committee had not been informed beforehand.

They say they also found an email from Mr Hickey’s lawyer in Ireland dated last Saturday telling him not to concede to a demand from Minister for Sport Shane Ross for an independent member to sit on the OCI’s investigation into how Mr Mallon came into possession of OCI tickets.

According to officer Aloysio Falcão, Mr Hickey was advised “to put Ross in his place”.

Mr Ross said he was aware that a second Irish citizen had been arrested in Brazil and investigating alleged ticket touting.

“I understand that person has accepted consular assistance and our Consul General is engaging with him,” he said in a statement.

Mr Ross said that “given the seriousness of this matter, and in the interests of taking swift and decisive action” he was returning to Dublin.

“I will immediately consult with my officials, with Minister of State Patrick O’Donovan, and with the Attorney General with a view to considering the options open to the Government and decide the best course of action.”

Police got the arrest warrant for Mr Hickey after the Rio organising committee confirmed that neither the OCI or Pro10 had advised the committee that tickets for the OCI’s use at the games were going to be returned for general sale, said Ricardo Barbosa, of the Rio police unit leading the investigation.

A spokesperson for the Rio Games’ local organising committee declined to comment on Mr Hickey’s arrest.

He also refused to confirm or deny the police claim that the OCI did not inform the committee that tickets from its personal quota were being handed over to Pro10 for general sale as was required by Olympic regulations.

Minister for Public Expenditure and Reform Paschal Donohoe said Wednesday afternoon he had received confirmation that an Irish person had been arrested in Rio.

Mr Donohoe said he did not know the identify of the person but believed consular assistance would be offered to them if requested.