Pádraig McCarthy lies second at Ballindenisk ahead of Sunday action 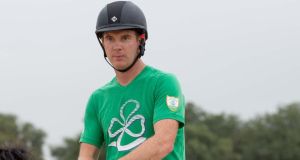 On board the 11-year-old Dutch Warmblood mare Bernadette Utopia, the Exeter-based Tipperary native picked up 3.2 time penalties to bring his current total up to 49.2. He is 10 points adrift of Britain’s Oliver Townend who remains on his winning dressage score of 39.2 with Lanfranco TSF, a 17-year-old Trakehner gelding.

Riding the 18-year-old New Zealand-bred gelding Cold Play to a two-phase score of 32.4, Townend also leads the CCI1* competition where four of his compatriots fill the next five positions. Breaking the British stranglehold is Ireland-based Australian Ben Leahy who is currently lying fifth with Feloupe (42.6).

Co Carlow’s Sam Watson maintains his position at the top of the Eventing Ireland CCI2* class as he completed Saturday’s cross-county phase without adding any penalties to his winning dressage score of 43.6 with his own 13-year-old Puissance gelding Ardagh Highlight. Here, Townend lies third with the British thoroughbred Khoi Traveler (46.6), just behind his compatriot Polly Stockton and the Irish Sport Horse gelding Lariats Sun (46.3).

Co Down’s Robyn McCluskey is the top-placed Irish rider in the 32-strong Bucas CCIJ1* class where she is in third place on the ISH gelding Rum Jumbie (39.9). British riders Phoebe Locke and Imogen White fill the first two placings with Union Fortunus (38.5) and Emill (39.7) respectively.

The cross-country phase of the shorter format CIC classes takes place on Sunday at the Co Cork event. At present the leaders are England-based Australian Caroline Power (Up Up And Away) in the Foulkstown Feeds CIC3* class, Sweden’s Ludwig Svennerstal (Box Leo) at two-star level while Britain’s Kristina Hall-Jackson tops the one-star class with CMS Google. Co Kildare’s Ava Banahan leads the pony section on Rathnaleen Dark Secret.