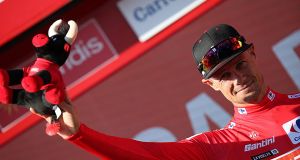 Ireland’s Nicolas Roche of Sunweb celebrates on the podium wearing the overall leader’s red jersey after the second stage of the Vuelta from Benidorm to Calpe. Photograph: Javier Lizon/EPA

Ireland’s Nicolas Roche had a storming ride on day two of the Vuelta a España on Sunday, going on the attack in the finale, netting second on the stage to Calpe and grabbing the race leader’s red jersey.

The sextet worked well together to eke out a lead of 34 seconds with five kilometres left before Quintana then made his move with three kilometres remaining, launching a big attack. Roche set off in pursuit but Uran and then Roglic and Aru got back up to him, causing the chase to stall.

Roche and Uran had started the day five and seven seconds respectively off the race lead and, with time bonuses up for grabs at the finish, marked each other closely. This was enough for Quintana to hit the line first, while Roche outsprinted Roglic, Uran and Aru to take second and, with it, the race leader’s jersey.

“It is an amazing feeling,” he said. “It is six years now since I had the leader’s jersey. I had an amazing day [then]. I only kept it for a day before, so to be back today in a leader’s jersey in a Grand Tour is . . . I’m speechless.

“This morning, the way I saw this race is that we would arrive with a 25-, 30-man group in the sprint and probably riders like [Philippe] Gilbert would be there for the jersey. Then when the group was reduced in the last 20 kilometres, it did come to my mind. I thought if I am in a good breakaway or do a good sprint, I could maybe get some bonus [seconds] and go in red, but until 20 kilometres to go I never thought about it.”

Roche ended the stage two seconds clear of Quintana in the overall standings, leading the race again having done so for the first time six years ago. Uran is third, eight seconds back. Overnight race leader Miguel Angel Lopez (Astana) finished in the chase group 37 seconds back and slipped to fifth overall.

Ireland’s other rider in the race, Sam Bennett (Bora-hansgrohe), had hoped to fight for the stage win but the final hour was much tougher than expected. He lost contact with the lead group just inside 30 kilometres to go, finishing well back, but will try again when the Vuelta continues on Monday.

The undulating 188-kilometre race to Alicante should be more suited to his talents, and he will be aiming for stage victory in his debut in the Grand Tour race.

As for Roche, he will savour the moment and hopes to keep the jersey for as long as possible. He said that team’s stated goals heading into the race were to ride for the Dutchman Wilco Kelderman. “I think today I showed that I have the legs to give me a shot too,” he said. “But I am not going to get over-excited. I think we need to stick with the plan. I will enjoy these days riding in red, and I will keep my mind on other opportunities.”