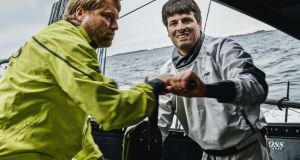 British Sailor Alex Thomson (left) and Royal Cork’s Nicholas O’Leary, who has announced a Vendee Globe campaign for 2020, will race together in next month’s 605-nautical mile Fastnet Race.

Royal Cork Yacht Club’s Nicholas O’Leary has launched a Vendée Globe 2020 campaign and as part of the build-up the Crosshaven sailor will compete in next week’s Rolex Fastnet Race as co-skipper with British round-the-world skipper Alex Thomson.

O’Leary (31), an emerging offshore sailing talent, has been training with the Thomson Racing team this summer and assisted in preparations ahead of the Vendee Globe in 2016 where, O’Leary, younger brother of double-Olympian, Peter, completed over 1500 nautical miles on board Thomson’s Hugo Boss.

The Vendée Globe is a round-the-world single-handed solo yacht race, sailed non-stop and without assistance. It takes place every four years.

O’Leary won the UK’s largest yacht race last month when he helmed the JPK 10.80 ‘Yes!’ to an overall win in the Round The Island Race at Cowes.

“Being chosen to co-skipper the boat with Alex is a huge honour and it allows me to start the preparation for my own Vendee Globe campaign in 2020,” said O’Leary.

There’s no doubt O’Leary is a headline Irish act in the race on Sunday week but he is by no means the only one. He’s not even the only Irish Vendee Globe campaign.

There’s a potent line-up of Irish performers for the record breaking Fastnet Race entry – the world’s largest offshore race. The 605-nautical mile race card was full in under five minutes, creating another record. Up to 400 boats will be on the Royal Yacht Squadron start line in Cowes on Sunday, 6th August.

Among the 12 Irish entries, from 28 participating countries, is a former Middle Sea Race class winner and some top ISORA performers. There’s also two sailing school entries from Dun Laoghaire and two West Coast entries, one from Foynes Yacht Club on the Shannon Estuary and another from Westport in County Mayo.

Mayo woman Joan Mulloy will be skippering the Cowes-registered Figaro 2 – ‘The Offshore Academy 21’. Her co-skipper is Cathal Clarke and they will be racing double-handed in the IRC 2 class.

Aoife Hopkins’ Tokyo 2020 challenge got a boost this week when the Howth hopeful won the Laser Radial Under-21 Women’s European Championships in France.

In Carnac, France, RSt.GYC solo sailor Sean Craig lies fifth overall after nine races at the RS Aero World Championships, a three-year-old design that has yet to establish as a class in Ireland.