In-depth process to be undertaken in search for new nickname 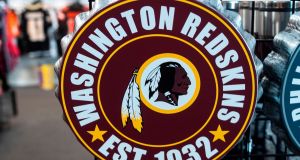 Having dropped the Redskins moniker, the NFL team will be known as Washington Football Team when the new NFL season begins. Photograph: Andrew Caballero-Reynolds/AFP via Getty Images

Washington’s NFL team will be known simply as the Washington Football Team when the 2020 season kicks off after dropping the controversial ‘Redskins’ moniker earlier this month.

With only six weeks until the new season is scheduled to begin, the team have indicated they want more time to find a long-term nickname, but will push forward with removing all references to the Redskins in the meantime.

“The decision to use ‘Washington Football Team’ for this season allows the franchise the ability to undertake an in-depth branding process to properly include player, alumni, fan, community and sponsor input,” a statement said.

“To date, we have been pleased to see so many people putting forward their vision of what the new name and design should be on their social media channels and we look forward to including their feedback as this process progresses.”

New uniforms are being designed for the coming campaign, in which Washington are due to kick off at home against the Philadelphia Eagles on September 13th.

The announcement comes 10 days after franchise owner Dan Snyder bowed to growing pressure to drop a name which had long been considered offensive to Native Americans.

Snyder had previously vowed never to change the name, but sponsors began to threaten to withdraw funding from the team amid the broader discussions on race which followed the death of George Floyd and the growth of the Black Lives Matter movement.

Washington – winners of five NFL championships, three of them in the Super Bowl era – are one of the oldest teams in the league, having been founded in Boston in 1932. They adopted the Redskins name in 1933 before moving to Washington in 1937. Their most recent Super Bowl title came in 1991.