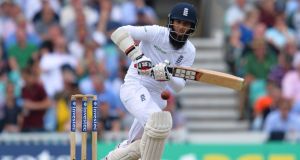 England’s Moeen Ali hits a boundary on his way to 108 during the first day of the fourth Test between England and Pakistan at the Oval. Photograph: Glyn Kirk/AFP/Getty Images

Until the late middle order hauled them out of it during the afternoon, England had dug themselves into the sort of hole that would have had the Harleyford Road shut for a month.

It was as if the clock had been wound back a week and we were back at Edgbaston. There it was Gary Ballance and Moeen Ali who rescued them from potential oblivion. This time round it was Jonny Bairstow, Moeen once more, and Chris Woakes who took their team to the sort of total that might once again prove challenging.

The loss of three wickets for five runs before lunch and that of Ballance straight after had left England lurching at 110 for five. But Bairstow and Moeen took the game to Pakistan, compiling a sixth-wicket stand of 93, only brought to an end after tea when Bairstow was caught behind for 55.

Moeen and Woakes then added a further 79, with the latter producing some of the cleanest driving of the summer before being caught at the wicket for 45, though he did not depart until he had reviewed the decision.

Moeen, though, batted sublimely, a languid presence at the crease, and although he lost Stuart Broad without scoring, and Steve Finn, he reached his third Test century with the last man Jimmy Anderson for company by launching Yasir Shah over midwicket for six.

At the time the press-box chatter was how, with the field spread, he might winkle out the necessary runs.

First-innings runs might, once again, come at a premium, but nevertheless with the last pair together, albeit one of them Moeen, Alastair Cook might, fleetingly, have fancied calling them in and having a tilt at the Pakistan batsmen for a few overs.

As it happened, Moeen holed out to deep midwicket to give Sohail Khan a second five-wicket haul of the series, and England were all out for 328. It left Pakistan three overs to bat, in decent enough light, and from the fifth ball of his first over Broad, from around the wicket, had Sami Aslam lbw, reviewed to no avail by the batsman. After the sticky moments, it was undoubtedly England’s day.

There were mitigating circumstances - there always are - which include one interminable referral to the third umpire early on and any number of decision-review-system referrals. But by midway through the scheduled day’s play only 35 overs had been bowled and by any standard that is unacceptable.

At Edgbaston, the opener Alex Hales refunded some money to a disgruntled spectator and will be hoping he has not set a precedent, particularly given the sort of day he had. From a distance, the pitch has a green tinge to it, but with Misbah-ul-Haq losing the toss, Cook decided to bat first in any case and he and Hales had added 23 easily enough when the latter clipped Mohammad Amir firmly off his legs, a skimmer that Yasir Shah plunged to scoop up.

The batsman stood his ground and despite the fact that one official, Marais Erasmus, was standing almost alongside the fielder, the umpires, who had unofficially ruled it a clean catch, decided to seek third-umpire confirmation. So poor were the pictures that nothing to the contrary could be gleaned and Hales had to go, uttering oaths under his breath.

Before lunch, each of Cook, Joe Root and James Vince had followed him, the captain bottom-edging a pull on to his stumps, Root steering a catch behind from a short ball from Wahab Riaz, and Vince edging a snorter from the same bowler. Batsmen do get those sometimes, but Vince will be regretting the loose manner in which he gifted his wicket in earlier innings. When Ballance received another good ball from Wahab and was caught at third slip, England were rocking.

Wahab impressed and is a bowler who when he has the force with him, can create formidable pace. Had the England badge on Moeen’s helmet not intervened, his first ball to him would have punched a hole in his forehead. Moeen blinked, shook his head, took his guard and with Bairstow, played a brilliant hand.

The wicketkeeper is enjoying a wonderful run with the bat, his appearance and busy demeanour immediately putting the pressure back on the opposition Standing at the crease, bat high, as Tom might when standing around a corner waiting to whack Jerry with a frying pan, he works the ball around skilfully, and the pair run like stags.

He was fortunate that when 13 and he drove a catch to backward point Wahab had overstepped, as was Moeen, who was missed at first slip when nine. Costly mistakes both by Pakistan.

In the end it was Bairstow’s exuberance that got the better of him. Amir sent a length ball wide off the off-stump and the batsman, flat-footed, drove vigorously away from his body, the ball moving back into him off the pitch and taking the inside edge. Sarfraz Ahmed did well to change direction and take the catch. Guardian Service