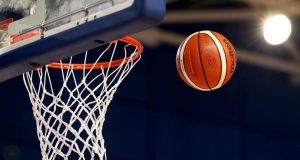 It’s a miracle that Irish basketball has stayed going despite the decades of neglect by official Ireland and the €1.5 million Basketball Ireland has now dared to publicly request is the least it deserves. Photograph: Tommy Dickson/Inpho

It’s already becoming lost in the mists of time and a thousand election promises but one of the small, significant disgraces of Irish sport remains pressing. And here’s a question. What is it that the minister for sport does all day?

What is it that Ireland’s chief sports honcho gets up to in the fabled office of Irish sport?

And one likes to imagine a fun office here: a brightly coloured, cluttered space with team pendants hanging on the wall along with framed black and whites images of previous sports ministers like Leo, Jim McDaid or John “the Bull” O’Donoghue gamely swinging a hurl or a cricket bat at some long forgotten photo opportunity or posing with suitable humility alongside inspirational figures like Ali or Tiger.

There’s maybe a symbolic baseball on the mahogany desk to be tossed about during brainstorming sessions a la Tom Cruise in A Few Good Men and a basketball hoop hanging over the wastepaper basket so the Minister can jauntily drain a ‘three-ball’ with the bunched-up printed email messages and letters that he deems worthless.

Letters such as, for instance, a request from the chief executive officer of Basketball Ireland for a meeting to discuss the welfare and development of the sport on this island.

One of the last small but significant outrages before last weekend’s election was the revelation by Bernard O’Byrne that he had tried, without success, to obtain a meeting with Minister Shane Ross or Minister of State Brendan Griffin for the past 18 months. Not weeks, mind. MONTHS!

In comparison to the major social issues on the agenda, it seems irrelevant. But it reveals so much about the attitude to what in Ireland are referred to as the “other sports”.

You’d imagine that if the president of the GAA or the chief executive officer of the IRFU or even if He Whose Name We Dare not Speak, formerly of the FAI, had called the ministerial office before The Fall; if any of those leaders of Ireland’s sports bodies called with such a request, they would have been granted an audience. Not Basketball.

O’Byrne mentioned this in conversation with Ger Gilroy, who is rarely stuck for words in his role as Off the Ball presenter but who in this instance echoed the disbelief of all listeners when he replied, stutteringly: “And . . . but . . . where . . . uummh . . . why not?”

And it’s a question that should be answered.

The moment illuminated a truth that anyone involved with Irish basketball has known for decades. Their game doesn’t matter to Irish government. And it never has. If basketball stopped tomorrow; if all games and all leagues just vanished in Ireland, it is doubtful that the subject would merit a second of conversation at the next cabinet meeting – irrespective of who is in charge when the dust settles.

Basketball is the second biggest game in the world but in Ireland it has always stubbornly existed in the margins and has kind of accepted that place as inevitable.

So it was heartening to hear O’Byrne speak up last week, pointing out the contrast between the governmental response to the FAI’s financial crisis and the way that Basketball Ireland was treated when it ran into financial trouble a decade ago.

O’Byrne took over when Basketball Ireland was on its knees: State grants of €1.2 million had been spent badly and a total debt of €2.5 million had accrued. In response, all State funding was withdrawn and the staff was more than halved, from 27 to 12. The very thing that FAI employees have rightly feared happening did happen in Basketball Ireland but on a smaller and less-reported scale. And it happened during the peak of the financial crisis, when the woes of a fringe sporting body seemed like small beer.

It meant that Ireland was unable to field international teams for several years, which is a shameful legacy. There are dozens of players and former players good enough to represent their country in an international sport and there was a particularly strong women’s team at the time. All were suddenly left in limbo.

For the past decade, any family whose child had the potential to make the international grade had to fund their progress – for camps, for clinics, for tournaments. It was a considerable financial outlay; some managed it but others simply couldn’t. But Irish basketball was putting its house in order and had to just shut up and get on with it.

And the thing is: Irish basketball does a lot of things extremely well on extremely limited resources and with meagre media exposure. After the first round of the GAA’s Allianz Football League, loud and general was the praise directed at Kerry’s David Clifford after his sumptuous display in Croke Park. That’s all fine: Clifford is a phenomenal talent and nationally celebrated as such.

It’s just a pity more Irish people haven’t had the opportunity to see and appreciate CJ Fulton, the young Belfast Star guard who has, for the past couple of years, given a series of sublime performances at schools, Men’s Superleague and Irish international level; gliding, masterful and supremely skilful displays which speak of hours of practice.

It’s a pity that more people don’t have any concept of Lorcan Murphy’s freakish athletic ability or see first-hand that the All-Ireland schools finals, which take place around this time of year in the Arena and which are, in many ways, the very point of sport in that they are unnoticed by those in the outside world while meaning the entire world to those within that bubble. The IRFU, for instance, could stick their heads in if they want to see what the atmosphere at a school’s sports occasion should be like.

While the GAA has been gnashing its teeth as to whether to have two referees for big championship games, Irish basketball has two referees officiating at every game, from local juvenile games to national finals. As an organisation, they’ve always been innovative.

They’ve been streets ahead in coaching – there’s a good reason why the Dubs brought Mark Ingle to give clinics to their attack and anyone with half an eye can see the patterns summer after summer. Irish basketball has been handing out game stats for the last 20 years. They’ve created a pathway for some terrific Irish players – Susan Moran, Michael Bree, Conor Meany – to further explore the game through college in America.

The standard of the game is rising all the time. It is the go-to sport for immigrant youngsters who arrive here. It is taking off at third level. It’s got a proud and fascinating and kind of insane history and tradition, as memorably chronicled in Kieran Shannon’s Hanging From the Rafters.

There remains the challenge of developing the game at adult level, where the cost of keeping national league teams on the go is prohibitive. And yet you look at what the resurrection of Tralee Tigers did for the spirit in that town over the past couple of winters and you see the potential. Ireland is cursed with a damp climate. It makes sense to further develop a sport that can be played under roofs in all weathers in that place the politicians refer to as “rural Ireland”, which presumably means everywhere past Maynooth.

For decades, Irish basketball has hung on through the stubbornness of those who run and coach and play the game simply because they’ve discovered the joy of it.

It would be hard to believe that no space could be found in the ministerial calendar to meet with Basketball Ireland for a year and a half m – !! – except for the fact that there has never been any real evidence that the political legislators ever saw any real point in trying to develop the game.

It’s a miracle that Irish basketball has stayed going through it all and the €1.5 million Basketball Ireland has now dared to publicly request is the least it deserves.

The willingness of successive Irish governments to treat it as a second-class sport has been one of the minor, silent shames in a country whose political class has never fully understood or thought about the importance of sport – all sport – to the society it seeks to represent. Whoever is next sitting in the fun office of Irish ministerial positions should at least invite the head of Irish basketball in to hear what he has to say. Chances are he’ll find a spot in the diary.