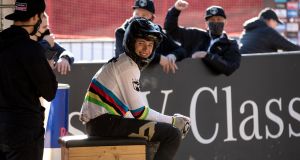 So it’s shaping up to be another big week for the Irish riders in possession of one of cycling’s most famous jerseys. Not just the green one, the one with the rainbow around the middle too, which is already fitting comfortably young on the shoulders of Oisín O’Callaghan.

Most people will tell you that cycling is a sport where lots of things can and often will go wrong, where luck has nothing and everything to do with it, and if O’Callaghan has his way will win him a mountain bike downhill World Cup as a junior, to go with his downhill World Championship title won in Austria two weeks ago. He’s not only that ambitious and that good, he’s still only 17.

Sandwiched between the success of Sam Bennett and Dan Martin at the Tour de France and the Vuelta a España, O’Callaghan has been writing his little own chapter in Irish cycling history, and if not yet widely read that’s okay because he’s only getting going – this his first season competing in the international junior ranks simply because he wasn’t old enough before, and for good reason.

Downhill mountain bike racing is not for the fainthearted and all about finding the balance between adrenaline and nerves, danger and risk, chance and opportunity, essentially while trying to keep some sort of balance on the bike. For O’Callaghan it probably helps that this is also the sport that runs in his blood.

It’s also comes at a time when it feels like the country is hanging on to every last positive news story it can get, beyond all the other positively negatives, and if you’re looking for inspiration then nowhere is that more precious now than in sport. Everything about O’Callaghan’s success on the world stage can also be brought entirely back home, the rainbow jersey he won in Leogang in Austria two weeks ago essentially all homemade on the trails around Ballyhoura in south Limerick, just not readily available anywhere in Ireland.

Indeed you can’t buy a rainbow jersey in the shops or online, given it’s one of the most prized jerseys in any sport. Well, you possibly could, somewhere, only you’d look a little foolish wearing it out on the bike, or anywhere for that matter, because everyone in cycling will tell you the rainbow jersey can only ever be won.

Which is also why only a strictly select number of Irish riders have ever worn a rainbow jersey, which the UCI, the governing body of world cycling, have been handing out to their world champions since 1927, first on the road, later the track, then cyclo-cross and also mountain biking.

Stephen Roche remains the only Irish rider to win it on the road, after his victory in Villach, Austria in 1987. Martin Irvine won one on the track in 2013, and there have been a few more in the masters age category, only O’Callaghan is unquestionably the youngest, and given his discipline is possibly the most fearlessly daring among them all.

It’s also a serious business. Earlier this year he signed a professional contract with team YT Mob racing, built around German bike manufacturer YT Industries and several other headline sponsors, which specialises in downhill mountain bike racing. That was decided after O’Callaghan won a sort of X Factor organised by the team, inviting 550 young riders from around the world to attend several talent camps across the various continents, where he ultimately secured one of the winning tickets to the team HQ in Granada in Spain.

Like most other sports, the global pandemic turned the season on its head, before the World Championships went ahead a little later than planned in Leogang, Austria, two weeks ago, Roche’s win in Villach 33 years earlier perhaps proving something of omen of good luck.

Producing “some of the most brutal downhill racing ever seen”, the central forest section hitting 39 per cent downhill gradient in parts, O’Callaghan clocked 4:02.14 on the 2.3km course, early on, and watched as each rider failed to better it, winning out from the British duo of Daniel Slack and James Elliot.

This week, O’Callaghan has been staying with his senior YT Mob team-mate Angel Suarez in Vigo, in northwest Spain, and next week they’ll drop over the border to Portugal, where in Lousã, another double-header of World Cup events will close out the condensed season.

Last weekend the first double-header was staged in Maribor in Slovenia, and O’Callaghan won both junior races. There has, by the way. sometimes been the hint of a curse on cycling’s rainbow jersey, only he’s showing no fear of that either.

“There were a lot of people older than me, who raced at this level all last year, so I thought top five would be really good,” O’Callaghan told me about that winning of rainbow jersey, at 17 years and six months one of the youngest in the history of the competition. “Because I’m still young enough to ride junior next year, I get to wear it for the rest of this year, and next year too, and not many riders have done that.”

None of this has happened by chance or accident, O’Callaghan’s World Championship win so early in his career carefully guided and nurtured by his father Chris, who co-runs the Ballyhoura Trailriders bike and rental shop, on the 100km of bike trails near where they live in Ardpatrick, close to the north Cork border, and also his mother Mary, who taught him who to ride a bike in the first place.

“I started racing downhill at age 12, that’s the youngest that’s allowed, and before that did regular mountain bike, which wasn’t really for me, a little too boring for me. I think that more daring side was always there, I’m not sure, because you can’t think about it. You just have to go for it.”

O’Callaghan’s career may be going rapidly downhill, in the purely positive sense, albeit with plenty of natural bumps along the way – his father taking him to the Alps every summer where he got to experience the steepest descents. He hasn’t been home since July, which means he’s also yet to bring a first ever rainbow jersey back to Scoil Pól in Kilfinane, before he gets back down to the fifth year syllabus.