Opening set proves a rough ride for the former champion, who refused to confirm that she had accepted Serena Williams’ apology 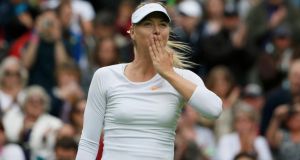 Russia’s Maria Sharapova after her victory over Kristina Mladenovic of France.

Perhaps all it took was a match, the scent of the grass, the sound of the ball and action. This year’s tacky pre-tournament verbal exchange between Serena Williams and Maria Sharapova may have set a tone of public respect and private resentment but yesterday that was put to rest. Almost.

Boyfriends with “black hearts” on one side set to Willliams’ boyfriend “that was married and getting a divorce and has kids” ensures a testy two weeks between the divas, both of them having fearlessly chased the low moral ground.

Of course everyone hopes they will meet, where Williams will bring overwhelming bragging rights. If it comes to it, Sharapova will hope to have the opportunity to echo the timeless Vitas Gerulaitis remark after beating Bjorn Borg – “nobody beats Maria Sharapova 14 times in a row”.

Yesterday Williams’ 13 successive wins were far from Sharapova’s mind after she played as solid a first round match as the number three seed could have expected against Kristina Mladenovic.

A fiery first set laced with aggression, uncommonly no service breaks and a feckless hit-like-there’s-no-tomorrow attitude from Mladenovic made the opening ride a rough one for the former winner.

Forced into a tiebreak by the world 37, the third seed came out on top 7-6, 6-3, a volley winner in a scratchy last point giving her the momentum in just under an hour. As so often happens between champion and pretender, Sharapova stepped up a notch, screamed a little louder, hit a few more winners and strangled the match.

Steely-willed Russian
No one better to do just that than the steely-willed Russian,”black hearted” Grigor Dimitrov on her arm or not. We’ll see him today. Eye candy yep, but he is also a beautiful tennis player in the Federer mould.

However, Serena and her reported apology about Dimitrov wouldn’t go away. Those looking for a running subplot found one when Sharapova declined to say if she accepted Williams’ apology. “I’d really like to move on,” she said.

“I’ve said everything I wanted to say about the issue. This is my work. This is Wimbledon. I’d really like to move on. Wimbledon just started. This is where all of us work and this is our job. Our job is to try and win matches and this is the most important thing in my life right now. Why would I be thinking of anything else?”

A set up, the second seed Victoria Azarenka almost cleared a path for Sharapova. The Belarusian collapsed in a teary heap in the second set of her match against Portugal’s Maria Joao Koehler. In a moment of absurd humour a quick-footed ball boy was first over to the writhing, weeping body. He assessed and evidently prioritised, picked up her racquet and scampered back to his corner.

Heavily strapped
Azarenko played on to win 6-1, 6-2, the second set taking 57 minutes. Far from comfortable with her right knee heavily strapped, she will have further tests to see if there is lasting damage. “After the serve, it happened so quick. My leg just kind of collapsed. I felt like my knee just turned to the other way, and it was just so nasty,” said Azarenko.

“I was in such shock. You know, for two minutes I had such a consistent pain that it just completely freaked me out.”