‘Complacency is very, very dangerous. I’m ready for whatever comes my way’ 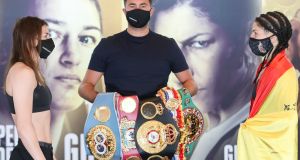 This week it was crossover star Chris Cyborg, who entered the narrative. The unending speculation to have Katie Taylor fight an MMA champion has become part of the ongoing storyline. The question always remains why Taylor would do that?

“I would be very, very open to fighting her if that’s a fight that people want to see,” said Taylor, who has acted positively to every name pulled out of the hat. Anybody, anywhere, make it happen has been the mantra.

“I assume if that fight does happen, she will have to come down [in weight] and make it at some sort of a catch weight,” she added. “Unfortunately, I can’t get up to 170 [pounds] so she would have to come down. If the fight was to happen, it would only be in the boxing ring for myself. I can’t imagine myself fighting in a cage.”

There was a time after she turned professional following the 2016 Rio Olympic Games that Taylor could only be measured by her amateur career. There was nothing else to estimate her worth and potential as a professional. Few have been surprised that she has turned out to be just as dominant as a professional. There is no secret to Taylor’s success.

But the ability to know how she campaigns and to understand her methods has never been enough for opponents to overcome her elemental strengths of speed and overwhelming technical skills. Cyborg maybe a sexy match up but the more immediate challenge is for Spain’s Miriam Gutierrez tonight.

Gutierrez might learn from Belgium’s Delphine Persoon. Persoon was the closest anyone has come to uncoupling Taylor with her four lightweight belts, understanding in their first fight that closing the ring and drawing Taylor into a punching match was a leveller.

In Gutierrez (13-0), Taylor faces a fighter with less obvious threat than Persoon. But again the undisputed lightweight champion will understand that, although Gutierrez has come to her 13 wins having fought none of the quality names Taylor has beaten on her way to 16 wins, there is still danger.

Again Taylor is the headline act in the Wembley Arena in a triple-header of women’s world title fights as women’s boxing grows into the mainstream. There is an aspect of a crusade to her career and also a continuing learning curve, especially after the last experience.

What will likely come Taylor’s way is a fighter, who is not in the same class and does not have the gears Taylor has at her disposal. But Gutierrez is durable, a boxer more than a fighter and she can bang. That alone is a danger and that’s all the challenger will be looking for, a chance to land hard perhaps only a couple of times.

“One punch can change a fight in professional boxing,” said Taylor this week. “She (Gutierrez) is an unbeaten fighter and better than people expect. Hopefully I will do a bit of everything – outbox her and outfight her.

“This is a huge opportunity for her. Complacency is very, very dangerous. I’m ready for whatever comes my way. I’ve learned the hard way,” she added.

“I got complacent years ago as an amateur fighter and that’s when I lost a fight. It was a hard lesson to learn, but an important one. I know that I can’t afford in the slightest to be complacent because that’s when you lose fights.”

Taylor is also meeting an opponent, who is 37-years-old to Taylor’s 34 and who is also a fan. All week the Spaniard has been little other than respectful, having spent years as an amateur and understanding the full implication of Taylors golden pre-professional career.

An advocate in Madrid for victims of domestic violence, Gutierrez is playing it softly, softly perhaps hoping her lack of antagonism in the build-up will somehow draw something from Taylor’s sting.

“Now I’m doing something in boxing that I really enjoy and everything that I do now is with a smile on my face,” said Gutierrez. “I’ve got my family and the people that surround me. In terms of this fight and going into it, I feel like I’ve already achieved something without actually having fought yet.”

Admirable sentiments, but they count for little. Gutierrez faces the closest women’s box has to a machine. One punch maybe but that is what it always is, a long, long shot.