Katie Taylor faces French rival as she goes for gold 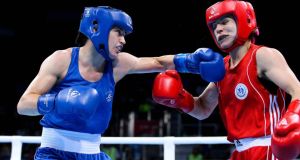 It doesn’t get any easier, although in securing her place in the gold medal bout at these European Games, and title shot number 18, Taylor may well have got through her hardest fight of these championships. Not that anyone is putting the gold medal around her neck just yet.

The only opponent left standing before her now is Estelle Mossely from France, and while she’ll certainly be no pushover, she can’t be any harder than Yana Alekseevna, the local Azerbaijani who pushed Taylor every second of their incredibly tense four-round semi-final – before losing out on a split-decision.

Taylor doesn’t see it that way. “I’ve faced her a few times before, and she’s always a tricky opponent, quite cagey,” she said. “She’s come through some tough fights, and I expect this one to be very tough as well.

“But I’m just delighted to have another gold-medal fight now. My semi-final was very close, and she [Alekseevna] is one of the top boxers.

“I felt I won a lot of rounds quite clearly, but there have been a few rounds given against me. But I think experience is everything in these big fights. You can’t buy experience, and I’ve been in this situation so many times before. I know how it feels to lose fights as well, and I never want to feel that way again.”

There was a feeling at the end that Taylor may well have lost, all three judges splitting the four rounds evenly between Taylor and Alekseevna, before awarding it to the Bray fighter on a split-decision. It was unquestionably the most anxious wait for a decision since Taylor’s Olympic gold medal bout in London, particularly with a partisan Baku crowd making their feelings known. What possibly won it for the Bray fighter were the strong punches towards the end of the last round, just as at judges were making their minds up.

“Yeah, things like that definitely catch the judges’ eye, at end of the round as well. That cemented the fourth round for me. I felt I was down after the third round, and had to put the pressure on her again, try to win the round clearly. That last round was all about heart, and it was close.”

Alekseevna was more than gracious in defeat, describing Taylor as her “idol”, yet at 27 she is improving every season – and is already looking like the main challenger to Taylor’s Olympic title next year.

“I’ve been analysing her fights a lot, with my trainer and I think it’s possible to win. Her speed and her pressuring, and she has good eyes. I think these are her strong points.”

There will also be a gold medal bout for Michael O’Reilly (3.15pm), who was given a bye into his middleweight final against another Azerbaijani, Xaybula Musalov, after his scheduled opponent, the Russian Maxim Koptyakov, withdrew because of a failed medical, having suffered an cut eye in his quarter-final.

1 Sonia O’Sullivan: Taming The Tan gave us one last roll of the dice before shutdown
2 Ireland’s underage rugby stars miss out on chances to shine at Easter
3 Premier League stress to PFA that players need to take pay cuts
4 Reality Bites – Tales from the new normal: Shane O’Donnell
5 America at Large: On Long Island, longing for a return to our field of dreams
Real news has value SUBSCRIBE

Eddie Jones set to sign contract extension with England 07:43
Final record attempts before lockdown; underage rugby feeling the effects 06:59
Premier League stress to PFA that players need to take pay cuts 07:37
Reality Bites – Tales from the new normal: Shane O’Donnell 06:30
Sonia O’Sullivan: Taming The Tan gave us one last roll of the dice before shutdown 06:15
Here is your handy guide to sport on television this week