Joker top of the pack in Dún Laoghaire Regatta 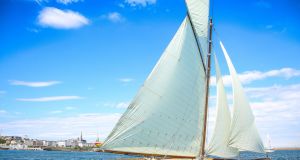 In the wake of Volvo Dún Laoghaire Regatta, Ireland’s biggest sailing event, the four waterfront clubs are already planning to build on the success of the 475-boat seventh edition that closed last Sunday and featured a classic boat festival as a special ingredient to mark the harbour’s bicentenary.

The stand out performance of the regatta was the runaway victory of John Maybury’s Joker II in the toughest IRC fleet of the event, if not the season.

The Royal Irish skipper had a 13-point win margin in a 28-boat class one fleet. In a remarkable performance for his J109 campaign, Joker II has now won three ICRA nationals in a row and last Sunday’s class win represents four VDLR wins in succession since 2011.

The 19-boat classic keelboat division had special appeal – and beyond many expectations – primarily because the vintage scene captured the essence of Dun Laoghaire’s sailing traditions.

Now the move is on to see how a classic fleet, moored on a purpose built pontoon adjacent to the National Yacht Club, can be made an integral part of future editions. It’s an exciting prospect for classic boat enthusiasts and the regatta itself.

It’s an entirely appropriate development for the regatta because it honours the origins of the global sport of yacht racing first framed in the South Dublin port over 175 years ago.

The clubs have already announced their next dates for the combined regatta and a new regatta chairman too. Dragon sailor Don O’Dowd of the Royal St George Yacht Club replaces Tim Goodbody of the Royal Irish Yacht Club for the 2019 event from 11th-14th July.

Pencilling dates into the fixtures calendar has become something of a sore point this season after three major events in three weeks in June all vied to attract boats out of Dublin, where 90 per cent of the boats are based.

And in July, just how WIORA and Dun Laoghaire Regatta (both sponsored by Volvo) were scheduled together has led to a lot of shrugging of shoulders.

For the future, the question must be how can this be resolved? It’s a co-ordination role Irish Sailing should be capable of performing.

Also in Cowes, Ireland’s sole entry at the Dragon Edinburgh Cup is four races into the regatta and tenth overall.

Martin Byrne’s Jaguar Sailing – crewed by son Conor and Pedro Andrade won last weekend’s UK South Coast Championships and the promise of big breeze on the Solent may lead to a higher result in the 38-boat fleet this week. Last year’s runner-up Harry, with Royal Cork’s Mark Mansfield aboard, has slipped from fifth to eighth.