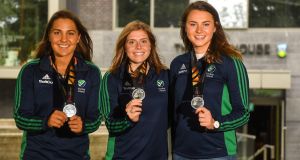 Deirdre Duke has become the latest World Cup star to be snapped up by a professional club as the striker confirmed she would join Düsseldorfer Hockey Club next week.

Irish skipper Katie Mullan will also move to Germany once terms are finalised with a club that will be named once the contract is complete.

They join Nikki Evans, who is set to start her second season with UHC Hamburg, while Anna O’Flanagan will switch from HC Bloemendaal to Pinoke in the Dutch league.

Duke added that a few more players received phone calls from pro clubs following Ireland’s run to silver in London last week, and so there may be some more switches ahead of the September 1st tip-off.

It is something that coach Graham Shaw is happy to see, with his players gaining the ability to focus on hockey full time in a high-quality competition.

“Graham has also encouraged us to take up chances at better hockey because it is a big jump up to international level,” said Duke (26), who scored twice in the 3-1 win over the USA. “He wants us to play at the best standard we possibly can, and being in the foreign leagues is probably closer to international level.”

It is something that has worked well for the Irish men’s team over the past six years, with more than 20 players now based abroad.

On the downside it will leave the EY Hockey League without star names for local fans to see week in, week out.

However, the German season dovetails nicely with Irish commitments. The first half of the campaign runs from September until the first week in November before returning next April after a lengthy indoor season.

In the interim, the Irish players are free to return for winter training camps and challenge matches, something Duke is hopeful the additional €500,000 funding can be channelled into supporting.

She flies out to Germany after a few final presentations and celebratory events this week. UCD – with whom she won four Irish Senior Cups and five Intervarsity titles – are celebrating the nine players in the Irish squad who played for the club.

On Sunday she will be supporting Nicci Daly, who will make her motor-racing debut as part of the Formula Female team at Mondello Park. Daly is using her involvement to raise money for the Irish Cancer Society in honour of her father, Vivion, who was a central figure on the local motor-racing scene before his death.