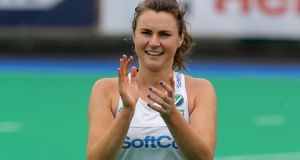 Two wins and two clean sheets marked an upbeat start to Seán Dancer’s role as the Irish women’s new head coach as they saw off Scotland at Stormont over the weekend.

Second-half goals from Deirdre Duke and Lizzie Colvin saw them win on Saturday evening 2-0 and Duke then backed that up with the only goal on Sunday with six minutes to go.

Ayeisha McFerran picked up the first clean sheet while Emma Buckley came in between the posts on Sunday to good effect in a tie which saw Gillian Pinder line out for the 150th time in green.

The Green Army complete their series on Tuesday at the same venue (11am).

Elsewhere, the Irish Under-21 women have a mountain to climb at the Junior European Championships after a tough 1-0 loss to Russia.

They bossed the tie but could only see Laura Foley’s shot cleared off the line and an Ellen Curran touch come back off the post among a host of near misses.

And Russia pushed on in the latter stages and got their goal with 12 minutes to go via Dayana Yushkova. In a five-team group, the semi-finals already look out of reach while they must win games against Spain or France later in the week to have a shot at avoiding relegation.

Next up is an imposing tie against tournament favourites the Netherlands.

The men’s Under-21 side, meanwhile, scored via Conor Empey, Callum Robson and Matthew Crookshanks in the first half to beat Belarus 3-1 in the European B division.

They play the hosts, the Czech Republic, on Tuesday in their second group game with Turkey on the agenda later in the week.

Ireland’s Under-16 boys got the pick of the Six Nations scores from Eindhoven, beating Poland 5-1 with Eddie Rowe thundering home two goals.