Two T20s and an ODI will extend stay in the Caribbean 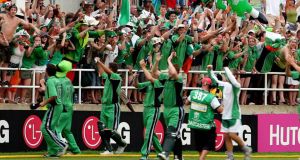 Irish cricketers celebrate with their fans after victory over Pakistan at Sabina Park during the World Cup in March 2007. Photograph: Jewel Samad/AFP/Getty Images

Ireland will extend their winter stay in the Caribbean after Cricket Ireland confirmed that two Twenty20 Internationals and a One-Day International have been arranged against the West Indies.

The games will take place at Sabina Park in Kingston, venue to Ireland’s group games during the 2007 World Cup. where they drew with Zimbabwe, beat Pakistan and lost to the West Indies.

The T20 games will provide a perfect warm-up for Phil Simmons’s side ahead of the World Twenty20 in Bangladesh in March, where the West Indies will defend their title.

The news of the three games comes just a day after the announcement that Ireland will take part in the Caribbean’s Nagico Super50 tournament in Trinidad and means the national squad will spend a month in the region as part of their preparations for the World T20.

The West Indies will go on to play England in a series of one-day and T20 games in Antigua.

“We are delighted to welcome the Irish team to play against our Windies in this upcoming series,” said West Indies Cricket Board director of cricket Richard Pybus. “It comes immediately after the Nagico Super50 Tournament and will be a great opportunity for the squad to get quality preparation ahead of the visit by England and before they head off to defend the ICC World T20 title which they won so spectacularly back in October 2012.”