Ireland need to punch well above weight in European semi-final 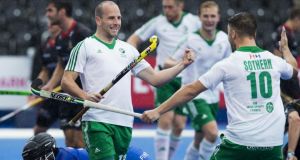 Peter Carruth celebrates after scoring against Belgium in the group stages of the European Championships.

Ireland’s men enter uncharted territory when they attempt to upset world number two side, the Netherlands, in their first ever European Championships semi-final (1.15pm) in London.

Ranked 14th in the world, Craig Fulton’s side have already made waves in the tournament in dismissing Belgium on Tuesday, getting the draw they required to edge the fourth best team in the world on goal difference.

Such an outcome has been on the cards in recent times, though. Indeed, Ireland have been pushing the top teams closer and closer. In 2013’s Euros, they missed out via goal difference on a final-four spot to England.

Last month, meanwhile, higher ranked Malaysia and Pakistan were both beaten in the World League Round 3 in Antwerp to push Ireland to the brink of Olympic qualification.

From that perspective, Ireland are two wins away from an automatic spot to Rio 2016 from this tournament as potential continental champions.

Their hopes via the World League list have also been aided this week by the elimination of Russia and France from this tournament. The upshot of this means if world number one Australia beat New Zealand at the Oceania Cup or South Africa win the African Nations Cup in October, Ireland’s ticket to the Games will be assured.

But the Dutch in the semi-final, however, are a different kettle of fish. In 41 prior meetings, Ireland have beaten them just once – a Test match in 1995 – and have never garnered a result in a competitive fixture.

The closest Ireland have come was two years ago when the Dutch needed a Robbert Kemperman winner three minutes from time to nick a 2-1 result in the group stages.

Most recently, Ireland lost 6-0 and 3-2 in the lead-up to these championships though Fulton will look to the improvements in the latter game but it is still an uphill task against a fully professional team.

By contrast, some Irish players have taken unpaid leave from work to commit to the side while they are also short a major sponsor despite sitting on the brink of Olympic qualification for the first time since 1908.