Ireland lose out to Bangladesh 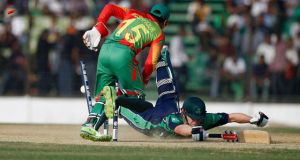 Ireland’s William Porterfield dives to make his ground during the match in Fatullah.

Shakib Al Hasan put in a match-winning performance as Bangladesh saw off Ireland in a World Twenty20 warm-up clash in Fatullah.

The all-rounder clubbed 58 from 32 balls as part of Bangladesh’s first-up 179 for three and then took two for 13 as the Irish were seen off by 44 runs.

Bangladesh had been in some trouble at 63 for three when Shakib and captain Mushfiqur Rahim joined each other at the crease, but a partnership of 116 (Rahim 59 from 30) saw them post a healthy total.

Ireland never looked in danger of reaching it and short of a run-a-ball 44 from opener Ed Joyce they were flat in their response.

Stuart Thompson added 35 lower down the order but the damage had already been done.

Ireland, meanwhile, have announced they will meet Scotland in three one-day internationals in the autumn.

The sides will meet at Malahide on September 8th, 10th and 12th in preparation for the World Cup in Australia and New Zealand.

“This series will serve as ideal preparation for both teams ahead of the World Cup,” said Cricket Ireland chief executive Warren Deutrom.

Scotland have enjoyed a return to form over recent months under the stewardship of Craig Wright and Paul Collingwood, qualifying after missing out in 2011.