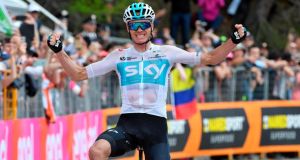 On one of the most extraordinary days in Giro d’Italia history, Chris Froome produced a performance that ripped the breath away, obliterating his rivals with a solo 80km escape to seize the maglia rosa (leader’s jersey) with two stages remaining.

It was remarkable to watch, especially up close. For not only did Froome defy a series of brutal climbs and temperatures that climbed into the 80s, but he continued to take massive chunks of time out of the overnight leader, Simon Yates, and then Tom Dumoulin during a breakaway that began on the Colle Delle Finestre and lasted more than two hours.

“It was going to take something really special to get rid of Simon and to get away from Dumoulin,” admitted Froome. “I wasn’t going to go from fourth to first on the last climb alone, so I had to do it from far out and Colle Delle Finestre was the perfect place to do it. The gravel road reminds me of riding in Africa, and I just felt good and thought ‘it is now or never’.”

Yet cycling’s charred history inevitably means that “something really special” will, rightly or wrongly, be accompanied by suspicion. And Froome, remember, is riding under a cloud as he fights to clear his name having failed a drugs test for salbutamol in September, as first revealed by the Guardian.

Many – including David Lappartient, the president of UCI, cycling’s world governing body – also believe Sky should have withdrawn the 33-year-old until his case was resolved. However, Froome insists he has done nothing wrong and continues to fight to clear his name.

”I know I have done nothing wrong, and soon that will be clear to everyone,” Froome said. “There will always be one comment or another, but the fans in Italy have been great, so grazie mille.”

For now, though, his sole focus is on becoming the first man since Bernard Hinault in 1982-83 – and only the third in history after Hinault and Eddy Merckx – to hold all three grand tours, the Tour de France, Vuelta a España and the Giro, at the same time. Given his astonishing performance, which quickly erased a 3min 22sec deficit over Yates and then put him 40 seconds clear of his nearest challenger, Dumoulin, that looks a certainty.

Before Friday’s 19th stage from Venaria Reale to Bardonecchia everyone knew that Froome would attack on the Finestre, the Cima Coppi of this year’s Giro, with its 45 hairpin bends along a summit 2,178m high. No one, though, expected the attack to be so frenzied or so sustained.

Before the start Yates’s directeur sportif at Michelton-Scott, Matt Scott, had punchily dismissed suggestions that his man was spent – or that Froome was a threat to the maglia rosa.” If it happens it will be on the Finestre,” he conceded. “But we’re ready for it.”

Yet his best-laid plans soon turned to dust as Yates cracked early and began to ride with all the uncertainty of a club rider on his first hors catégorie climb. For two weeks the 25-year-old from Bury had worn the pink jersey with distinction. Now he had to suffer the ignominy of finishing 38 minutes back.

Froome, however, was merely getting started. A sustained attack with 80km remaining instantly left the rest of the field gasping, and by the summit of the Finestre he had already opened a gap of 42 seconds to a group of four riders headed by Dumoulin.

“We took the decision on Thursday night to ride in this way,” said Froome. “I know the roads like the back of my hand, so it made it a lot easier. It was a big risk to attack so far from the finish, but it was a well-calculated risk. The team were fantastic, they made a really strong pace at the Colle Delle Finestre to make the pace for me to go. This is what bike racing is all about.”

At the summit Froome passed a man in an inhaler suit – a reference to his failed salbutamol test – but he still wanted more. And he found it on a thrilling descent. At times his riding looked reckless and at one stage a motorcycle had to brake suddenly to avoid knocking him off his bike but it was hugely effective.

By the time Froome began his climb up the Sestriere, an ascent famous for Lance Armstrong breaking away from the bunch in the 1999 Tour de France, Froome’s lead had extended to one minute and 52 seconds.

Try as he might, Dumoulin was unable to respond, and by the time Froome passed the “40km to go” sign he was virtual race leader – although there was nearly disaster when he had to swerve past a crashed motorbike. That, however, was only a minor hiccup, and Froome continued to power up to the finish at Bardonecchia.

Now with only Saturday’s 214km stage from Susa to Cervinia facing him before reaching Rome on Sunday, Froome stands on the verge of an astonishing victory – and he clearly has no plans to falter now.

“We are not going to celebrate just yet,” he said. “But we can see how quickly things can change here. I gave it everything but I tried to stay within my limits so hopefully we can finish this off tomorrow.”

Yates was mystified at his performance. “At the start there was no signs of anything wrong. I was just tired, extremely exhausted and that’s bike riding unfortunately. I tried to manage [the gap] but I really had nothing to give.

“I gave everything today. It’s just how it is. But I’ll be back. It obviously hurts, but I have said all along that this is how I needed to ride this Giro to try to win it and if I achieved nothing more I can still be happy. And I will be.”

3 Ulster maintain unbeaten start to go top of Conference A