Gary O’Donovan interview: ‘I get to row with the fastest man in the world’

Rowing Ireland have three boats competing in Rio. It's a tough endurance sport requiring strength and skill. We spend a day on the water with the three women and two men that make up the squad at their County Cork training base. Video: Bryan O'Brien 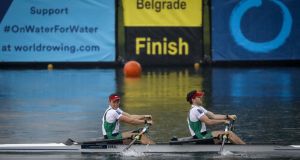 Ireland’s Gary O’Donovan and Paul O’Donovan competing in Serbia. The big target is next year at the Tokyo Olympics. Photograph: Srdjan Stevanovic/Inpho

The catch. That is the blade entry into the water.

Father Ted wins a £200 bet. Himself, Dougal and Mrs Doyle depart Craggy Island for the mainland to pick up the winnings with Dougal and Ted taking in a trip to the Very Dark Caves. Ted is surprised to see Richard Wilson, from the BBC sitcom One Foot in the Grave waiting outside. Thinking it would be hilarious Ted decides to go greet him with his catchphrase: “I don’t believe it!”

6 Moses Farrow: ‘I felt inherently like I was a bad kid. The abuse at home reinforced that’

10 Enda McDonagh obituary: A theologian scholar with a towering intellect

15 Hotel isolation for 20 states excludes US, UK where cases ‘rampant’

21 Tennis’ uncomfortable truth: Djokovic might be greatest of them all

25 How vaccine laggard CureVac hopes to come out on top

26 North’s status under Belfast Agreement is an inconvenient truth

28 Gordon D’Arcy: No Irish player has inspired in the Six Nations like Seán O’Brien used to

29 Lack of trust causing women to put their lives at risk, CervicalCheck warns

30 Israel to send 100,000 vaccines abroad but only a portion to Palestinians

31 ‘The type of pornography that my partner watches upsets me’

37 ‘An accident is not a crime’: Tiger Woods will not face charges in crash