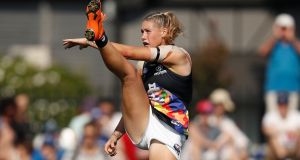 Michael Willson’s photo, a stunning portrait of the athleticism on show in the AFLW. Photograph: Michael Willson/AFL Media/Getty Images

What would follow was also, unfortunately, all too familiar. On Monday, Channel Seven’s Australian Football League Facebook page posted a photograph of the player’s distinctive kicking action and captioned it “Photo of the year”. The comments came in thick and fast, as you would expect from a picture of that calibre. Yet most of them were not celebrating the moment, the athlete or the team that would go on to win that game and make the competition’s first ever finals series.

Fans on social media were quick to call out the vile commentary that was appearing, yet no action was taken until Tuesday, when the post, including the comments and the photograph itself, was removed. 7AFL posted its reasoning for doing so on Twitter at 6.28pm; three hours later “Tayla” was trending on Twitter.

While the messaging from the AFL’s broadcast partner was somewhat admirable, in that it acknowledged the harmful nature of the comments, erasing the image was even more damaging. Deleting the photograph, and Harris, from a digital discourse does not silence the haters and the trolls. It silences her. It silences the athletes. It silences everyone whose identity was vilified in those comments.

The tweets and posts that were directed at 7AFL were not calling for the photograph’s removal. They were calling for moderation and reporting of the degrading, sexist, transphobic, homophobic and hateful messages that sat beneath it. Such calls for social-media moderation have been made frequently by AFL Women’s fans concerned for the health and welfare not just of the players who are the target of the abuse but also of the wider community. Such demeaning comments additionally cause serious harm and exclude people from what should be an inclusive and welcoming environment.

Here’s a pic of me at work... think about this before your derogatory comments, animals. pic.twitter.com/68aBVVbTTj

Many of the comments made on the post were reprehensible & we'll work harder to ban trolls from our pages.

Fans sought to rectify this misguided approach to troll management with a multitude of repostings of the photograph, on multiple platforms, and to push for more social-media monitoring.

Harris told a radio breakfast show today that she has been overwhelmed by support for her but wants to highlight bigger issues at the heart of the controversy. “I’m feeling empowered this morning. I think because of the reaction that’s come, it’s been a bit of a whirlwind,” she said. “I’m happy to talk about this, because I’m feeling fine now, but there’s people who may have experienced things like sexual assault who would have seen this, too, and their reactions might be very different.

“We’re not talking about the trolls right now. We’re talking about society right now and a much bigger picture. Some of the comments were sexual abuse, what I would consider sexual abuse on social media,” she said. “These people need to be called out by the AFL, but something needs to go further. It’s something maybe Victoria Police need to look at.”

Harris’s trolling is not an isolated incident. A post on the AFL’s Facebook page celebrating the career of Cecilia McIntosh of Collingwood, the AFLW’s oldest player, as the 39-year-old announced her retirement, was also recently deleted in an attempt to remove inappropriate comments. McIntosh is a Commonwealth Games silver medallist in javelin and has also represented Australia in bobsleigh at the Winter Olympics. Such a decorated athlete deserves her career up in lights on the league’s social-media accounts. Its removal removes her from more than just the Facebook timeline: it begins to remove her achievements and diminishes her value as an athlete.

This isn’t about these athletes not being able to handle criticism. It is not about the right to voice opinions about the game. These comments are not criticism. They are not about the game. They are misogynist, targeted attacks that strip the power from these athletes who put their bodies on the line to play the game they love. Their bodies are then reduced to abhorrent and unmoderated comments of people whose power is elevated when they cause change in this way.

The removal of these posts does not punish the perpetrators. It punishes the people who are their focus. By not moderating, blocking and reporting the people behind these keyboards, these athletes begin to learn they are not worth the fight. That message permeates society and the internet, and allows the trolls to continue, leaving the athletes to fight the battle.

Harris reposted the photograph last night in a retaliatory tweet, but she should have never been put in that position in the first place. Additionally, that responsibility should not rest on the shoulders of the fans, no matter how exceptionally they rallied in this case, to rectify the message that Harris’s image needs to remain visible. The league, the player association and the broadcasters need to rally and ensure they are not just adequately prepared to monitor their social media but understand the gravity of pressing delete when it comes to how women are represented in sport.

Late on Tuesday night, 7AFL relented to the force of a mobilised fan base and apologised. It reposted the photograph with a promise to “work harder to ban trolls from our pages”. If this is the outcome of this debacle, then let’s hope this is the last time we see women erased in sport. – Guardian, agencies