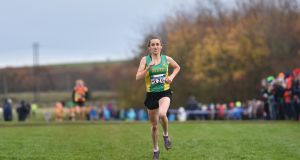 Shona Heaslip of An Riocht AC on her way to winning the women’s senior cross-country championships at the National Sports Campus in Abbotstown, Dublin. Photograph: David Fitzgerald/Sportsfile

Properly testing cross-country conditions seem like a rare thing these days, and yet Shona Heaslip still made light of them in defending her national senior title on the purpose-built course at the Sport Ireland Campus at Abbotstown.

It helps that Heaslip is suitably fleet-footed: the former Irish dancing champion won in a close sprint last year, but opened some distance on this occasion to win a little more comfortably from Rio Olympic steeplechaser Kerry O’Flaherty.

Despite her relative inexperience, Heaslip, who runs with the An Riocht club in Tralee, bided her time in the opening laps of the 8km race before gently surging in front, leaving O’Flaherty in chase. Still, it was a fine second place for the Newcastle & District athlete, now aged 36 yet running stronger than ever.

Conditions were ideally testing, too, since Sunday’s races doubled as the Irish selection trail for next month’s European Cross Country in the Slovak town of Šamorín. With the last two championships staged on the Mediterranean coast, this year’s event returns to the colder climes of Central Europe.

Both Heaslip and O’Flaherty are now assured of selection, as are men’s winner Paul Pollack and runner-up Kevin Dooney from Raheny Shamrock, who held off Hugh Armstrong from Ballina for second.

Pollack missed the London World Championships marathon with injury, but has recovered well, and the Annadale Striders man is rounding into form for the trip to Slovakia on December 10th.

Fionnuala McCormack, the two-time former European champion, didn’t race on the day, but is eyeing up another crack at that title, which she won back-to-back in 2011 and 2012.

Two more Rio Olympians – and Leevale clubmates – followed Heaslip and O’Flaherty home: another steeplechaser, Michelle Finn, just getting the better of Lizzie Lee, the 2016 Rio marathon runner also back in competitive mode running very well to finish fourth. Both are still likely to get the international call-up. The full Irish teams for Slovakia will be announced on Monday.