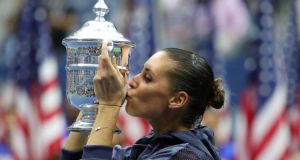 Pennetta, whose victory had given her, at the age of 33, her first major title in singles, told Vinci she was going to announce her impending retirement.

“What?” Vinci said in Italian, unable to conceive of why Pennetta would retire when she was playing her best. But after a few seconds, she changed her mind.

So a few minutes later, Pennetta, a 7-6 (4), 6-2 victor over Vinci, closed her on-court interview by revealing to the fans at Arthur Ashe Stadium another surprise in a tournament full of them: after the year-end tournaments in Asia, Pennetta’s long career will be over.

One of the more engaging personalities on the WTA Tour, the 26th-seeded Pennetta said she felt she was losing the competitive fire to win big matches. She made the decision a month ago in Toronto after a great deal of thought, she said; no matter what happened in New York, this would be her last US Open.

There were other surprise results along the way, with top players like Andy Murray, Ana Ivanovic and Caroline Wozniacki losing before the quarter-finals. It was unexpected, too, when a drone flew about 30 feet over Pennetta’s head at Louis Armstrong Stadium and crashed into empty seats, causing a short delay in her second-round match.

On Friday, the tennis world was shocked when Vinci, who was unseeded and ranked 43rd, defeated No 1 Serena Williams to end Williams’s bid for a Grand Slam. Then Pennetta surprised number 2 Simona Halep in the other semi-final to set up the first all-Italian final in a major tournament – an event so big that Italian prime minister Matteo Renzi flew to New York (with Fognini on board) to see it.

Pennetta is from Brindisi and Vinci from Taranto, and they first played each other at Pennetta’s home club. Later, they moved to Rome to enrol in the Italian tennis federation’s development programme and lived together as roommates for four years.

They have played together in doubles and on the Italian Fed Cup team and are as close as any two players on court. That relationship added to what Vinci called a series of miracles that made Saturday happen. “I beat Serena, first miracle,” she said. “And then two Italians can reach a Grand Slam final: two, a miracle.”

The final miracle was that just weeks after deciding this would be her final year of tennis, her friend won her first major title in 49 tries (dating to the 2003 Australian Open).

Pennetta has certainly enjoyed her 18 years on tour, but she also said her profession had required a singular focus, at the cost of missing other things in life. Winning the US Open was quite a pay-off. – (New York Times Service)