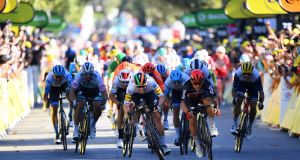 Sam Bennett of Ireland and Caleb Ewan of Australia racing for the line on stage three of the Tour de France to Sisteron. Photograph: Stuart Franklin/Getty Images

The Tour de France peloton left the French Riviera behind and turned towards this year’s first Alpine stages, with Caleb Ewan of Australia taking the fourth stage win of his career in stage three to Sisteron, at the foot of the Alpes-de-Haute-Provence.

In a virtuoso sprint, reminiscent of Mark Cavendish at his best, the diminutive 26-year-old slalomed deftly past his rivals to pip Ireland’s Sam Bennett on the finish line.

“I was a bit too far forward, so I dropped back a bit into the wheels,” Ewan said. “That gave me time to rest the legs a little before the last hit out. Coming from behind is a bit of a risk, but I found my way along the barrier and it worked in the end.”

Ewan’s win confirmed him as the hottest talent in Grand Tour sprinting.

“It’s the biggest race in the world, and it’s the one that every rider wants to win at,” said the Australian, a winner in Toulouse, Nîmes and Paris in 2019. “I’m so happy to get another win and prove that last year wasn’t just a fluke.”

Success lifted the clouds of despondency from his Lotto-Soudal team after what its manager, Marc Sergeant, called “a few terrible days of misery”.

Before the Tour even started the Belgian squad were forced to send support staff home after two failed tests for Covid-19, while star riders Philippe Gilbert and John Degenkolb were eliminated by crashes during the chaotic first stage.

With some still recovering from injuries sustained in Saturday’s crash-fest and others mindful of the Tour’s first summit finish at Orcières-Merlette, the peloton was happy to ride at touring pace. A soporific day’s racing exploded into life only in the final half hour.

Earlier a three-rider break had slipped clear inside the opening kilometre but the French trio – Anthony Perez, Jérôme Cousin and Benoît Cosnefroy – had conflicting interests, Cousin seeking a stage win and Perez and Cosnefroy duelling over mountain points.

As his companions dithered, a frustrated Cousin was left with no option but to forge ahead alone with 130km to race, but the 31-year-old has become well accustomed to lengthy, lonely rides, having spent long periods of lockdown bike-packing in Portugal.

But Perez, who had sealed tenure of the King of the Mountains jersey, saw his ambitions dramatically thwarted when disaster struck on the descent of the Leques. The Frenchman, chasing back to the peloton after a puncture, crashed into his team car at 60 kilometres an hour and sustained a broken collarbone, forcing him to abandon the Tour.

Some 40km from Sisteron, the day’s climbs behind them, the peloton picked up speed and finally reeled in a weary Cousin to set up the inevitable contest for the final sprint.

“I can’t win in a sprint or in the high mountains, so I have to try my luck on this kind of stage,” Cousin said. “Today I wanted to have fun, that’s also what I like on the bike.”

Alaphilippe, meanwhile, remained tucked in the main bunch and safely defended his overall lead, but will face his sternest test yet in Tuesday’s finish to Orcières-Merlette ski station, expected to be the first major rendezvous for the leading contenders.

“We defended the yellow jersey today and we’ll do it again tomorrow,” he said. “Tomorrow [Tuesday] is a big day and there’s a big climb up to the finish. We’ll take it day by day and see what happens.”

“Alaphilippe is capable even of extending the gap tomorrow,” Egan Bernal’s teammate Michal Kwiatkowski said. “But there are opportunities to take that yellow jersey from him. There will be riders who are going to try it. I guess we will see a dynamic finale tomorrow, but it’s not the hardest day if you look at the whole three weeks.”

Meanwhile race organisers confirmed that no cars or camper vans will be allowed on the Tour’s major climbs.

“There are 27 climbs that will be very limited with no cars or camper vans allowed,” the Tour event director Thierry Gouvenou said. “We don’t want to forbid the public but to limit it. We are trying to find the best way for the riders to race without putting them in close contact with others.”