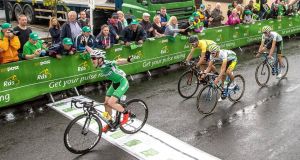 The victory comes just over five weeks after he broke his collarbone and makes his first Rás participation a success.

In addition to clocking up the win, he also jumps ten places to fourth overall.

“I was under no pressure coming into this race,” he said, speaking of his injury and the Ireland national team’s expectation of him. “But I always put myself under pressure. And a lot of people expect big things from me.

“To come away with a stage win hasn’t sunk in yet, but it is nice to win a UCI race in your home country and in front of a home crowd as well.”

Dunbar was aggressive for much of the 155 kilometre stage from Dungarvan. He was involved in several moves, but each of these was hauled back. However he was a central part of the key break of the day which pushed clear on Mount Leinster, going over the summit with Fankhauser, Hindley, Hamiliton and Storer.

The first category climb peaked 49 kilometres from the finish and the quintet knuckled down to open up a lead of over a minute.

All had reason to work: Fankhauser was distancing the riders in second and third overall, Matthew Holmes (Britain Madison Genesis) and Irish national champion Damien Shaw (An Post Chain Reaction).

Hindley and Hamiliton had started the day fourth and ninth overall and knew they could move up; their teammate Storer was certain to help in that goal.

As for Dunbar, he knew he could also leapfrog the general classification positions of those who were behind.

However the stage win was a more immediate target, and he eschewed his normal attacking instinct to pursue that.

“I sat on, I had nothing to gain from it. I didn’t necessarily have the legs to attack because I did so much early on,” he explained. “I thought the best I can get out of this is a stage. I would have been really disappointed if I didn’t get the stage. But I have it, so that is the main thing.”

The chase group with most of the other general classification contenders finished 56 seconds back. As a result Fankhauser has seen off the overall challenge of many of his rivals. Hinley, Hamiliton and Dunbar are now second, third and fourth overall, three, 13 and 19 seconds behind. Shaw and Holmes slip to fifth and seventh respectively and, being a minute in arrears, have only a minimal chance of winning the race.

It looks, essentially, like a battle between four riders. 2014 champion Fankhauser is on the verge of a rare second Rás victory, and appeared a little less worried on Saturday afternoon.

“This makes it a lot easier tomorrow but I expect a hard stage with a lot of attacking. I hope to keep yellow now. Winning the race again would mean a lot to me.”

Dunbar knows the race to Skerries tends not to lead to big time gaps but will look out for chances.

“If the opportunity arises I will take it with both hands. The race isn’t over yet,” he said.