Dan Martin’s Vuelta Diary: ‘I saw Nico attack . . . he surged and went away like a rocket’ 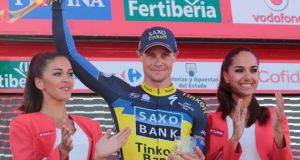 Saturday: Stage one, team time trial, Vilanova de Arousa to Sanxenxo (27 km)
And we’re off. Another month, another Grand Tour. It was certainly an interesting and different start to the Vuelta a España on Saturday, with the riders taking a boat ride across the harbour just before the team time trial began. It was a bit surreal, being kitted out in aero gear, aero helmets and then doing about two knots per hour on the water going to the start!

We arrived about four minutes before we were due to go. That time right before an effort is normally really stressful, yet we had this tranquillity of coasting on the water. The start on the glass road above the water was interesting and surreal too.

We started off really well as a team. Garmin-Sharp is renowned as a time trial squad and while the guys we have here in the Vuelta are not specialists, we were pretty confident of doing a good ride because of the horsepower that they have. We have a lot of riders here who are good on the flats.

Unfortunately on the first downhill one of our riders, Koldo Fernandez, lost his front wheel on one of the corners. Michel [Kreder] couldn’t avoid him and went down too, while I just missed him by about two kilometres.

His bike came spinning across the road in front of me. I was left counting my lucky charms as I went so close to crashing but stayed upright, it was crazy.

While I survived that, it was still bad for our team as there were just five of us after that. Koldo and Michel were on the floor and two others had to brake really hard to avoid falling and were left a bit behind. We waited for them at the bottom of the downhill and obviously lost a lot of momentum. It wasn’t the best scenario for our team.

We lost one minute 41 seconds to the winning squad, the Astana team of the Giro d’Italia winner Vincenzo Nibali. Obviously that is disappointing for the overall classification.

I know I said that I wasn’t setting out to ride for that, but it is disappointing to lose so much time over nothing. I really think we could have been top five or six in the team time trial, but instead we were nearly last.

There was one reassuring thing: my legs felt really good. I didn’t do a lot of training in the build-up to the race as I wanted to be sure I’d recovered from being ill during the Tour de France and also because I’m targeting the world championships in September.

But I felt very strong in the team time trial, pulling really hard on the front and doing long turns for the team. That gave me a lot of confidence as to how my legs are going to be in the next few days.

Sunday: Stage two, Pontevedra to Alto Do Monte Da Groba (176.8km)
Stage two was the first mountain top finish of the race and I was quite surprised by how it went. Before the stage I said to myself that it would be really good if I limited my time losses to less than a minute. Instead, I finished alongside the general classification guys in 11th, just 14 seconds behind the stage winner, my cousin Nicolas Roche.

Heading into the race I knew it would take some time to get up to race speed so that performance was very reassuring. I’m conscious that I need to get rid of the cobwebs from not racing recently so early in the stage, I was doing some efforts. It might have looked a bit weird, but I stopped for a pee at one point and then did a big sprint to get back on. Normally you take it as easy as possible to save energy, but I wanted to blow some of those cobwebs away.

My team rode very well to put me in a good position before the final climb, then I felt good on the slopes. I was never in difficultly, although when the sprint went I didn’t have the sharpness I would have needed to go for the win. Still, it’s massively encouraging.

My goal now is to get through today’s stage without losing any time, then I think I will be looking very confidently at the last 10, 12 days when we really hit the proper mountains.

I saw Nico attack off the front on the final climb. He surged and went away like a rocket. It was fantastic to see, particularly as he has had a frustrating season.

We were riding along earlier, having a really good conversation. He was kind of saying, “You know, tomorrow is probably more my type of stage. I said, ‘look, what about today? You have to take your opportunities.’ ”

You can see he is in really good form, he has been training really hard before this, and it was great to see him be so aggressive and to come out victorious.

Finishing the job
Nico has gone close before, taking second on stages of the Tour and the Vuelta. When I saw the guys he was going clear with, I knew he was a better sprinter than them.

However, nerves can get the better of you sometimes and I was hoping that he didn’t go too early. But he finished the job off nicely. It was great to just come across the line and know he had won.

I was so, so happy for him. I didn’t get a chance to speak to him afterwards, but I’ll make a point of it on stage three. I’m sure many other riders will also be congratulating him too.