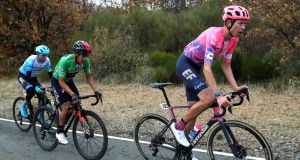 Dan Martin (left) behind Richard Carapaz and Hugh Carthy during the 17th stage of the Vuelta a Espana 2020 cycling race over 178.2km from Sequeros to Alto de la Covatilla. Photo: Kiko Huesca/EPA

It came down to the final climb on the last mountain at the climax of the cycling season and, in the end, Dan Martin simply ran out of hard road, one place short of a podium position at the Vuelta a España.

In the thrilling finale for the three positions ahead of him, Primoz Roglic just about survived a late uphill surge from Richard Carapaz to finish Stage 17 with an advantage of just 24 seconds, the defending champion from Slovenia now safe in the leader’s red jersey with only Sunday’s flat run around Madrid to come.

As expected, that final climb of the penultimate stage to the ski resort at La Covatilla turned into the last proper punch-up for all the leading positions. After rolling with those punches most of the way Martin was eventually distanced with 5km to go, finishing the stage in 18th position, dropping almost two minutes off of third place, nailed down by Britain’s Hugh Carthy, but finishing comfortably placed in fourth.

That’s still the best Grand Tour finish by any Irish rider in 32 years, after Seán Kelly won the Vuelta outright in 1988, and improves on Martin’s previous best of sixth place in the Tour de France in 2017; he was also seventh in the 2014 Vuelta, this his fifth top-10 Grand Tour finish in all. With a Stage 3 win, and two more third place finishes, it proved again that, at his best, Martin is one of the hardiest riders on the road.

“I started off the day feeling good, but that was one of the hardest races I’ve ever done,” said Martin. “With the cold and rain and savage pace all day it was just one stage too far for me. I emptied the tank and minimised our losses.

“We envisaged an attack on the podium but in the end the three guys in front were just better. I’m incredibly proud of what we have achieved these past three weeks. Israel Start-Up Nation signed me last year with the belief that I was capable of results like this and it’s amazing for me to pay back that belief.

“It’s been one hell of a ride and to get the best Grand Tour result of my career and a stage victory, we could not have imagined such results three weeks ago. It’s a milestone for the team as we build into what is an incredibly exciting year next year where our ambitions as a team will be even greater, and it makes me hungry for more next year.”

In the end though there’s no arguing with the quality of the trio in front of him, Roglic (Jumbo-Visma) taken to his limit by Carapaz (Ineos Grenadiers), the rider from Ecuador who started the day 45 seconds behind. After Frenchman David Gaudu from Groupama-FDJ was the last of the breakaway riders and first to the top for his second stage win, every one of those seconds began to count. Carapaz came in eighth, 2:35 down in Gaudu, Carthy of EF Pro Cycling was ninth, 2:50 down, with Roglic in 10th, 2:56 down – with that keeping those three podium positions just about intact.

Martin finished up 1:56 overall down on Carthy, knowing he couldn’t have done much more, holding a third-place podium position from the opening two weeks, only to lose it to Carthy after the British rider won the stage finish on the Angliru last Sunday. “Today will be really aggressive, and we’ll go full gas all day, continue how we have ridden so far in the race,” Martin said beforehand. And that is exactly what he did, his team at Israel Start-Up Nation giving him all the protection they could early on.

Sam Bennett also made it through the penultimate day without any great worries, finishing 39:22 back and well within the time limit (53:01) and can now set his sights on winning the flat-out final run into Madrid on Sunday, after taking second in that final sprint a year ago. Deceuninck-Quick Step are still waiting on that 100th Grand Tour stage win, and what better time to deliver it than the last sprint in the last UCI race of the 2020 season.

La Covatilla came at the end of the 178.2km stage from Sequero, which featured five intermediate climbs in all, including the last 11.4km to La Covatilla, which sits at an altitude of 1,962m – and located 220km west of Madrid, almost in sight of Sunday’s finish proper. The popular ski resort south of Salamanca has already hosted five stage finishes of the Vuelta a España, including in 2011, when a 25 year-old Martin produced one of his breakthrough rides and secured his first Grand Tour win, coming on Stage 9 of that year’s race.

Nine years later, Martin started with his sights still set on the podium, only once he hit the last 5km this time the fatigue began to tell.

No disputing either the destination of the 75th Vuelta a España, Roglic proving himself the best rider in the world, rivalled only by fellow Slovenian Tadej Pogacar, who snatched his Tour de France lead on the penultimate stage of that race exactly seven weeks ago.

Having turned 31 mid-race, winning four stages in all, it may prove Roglic’s closest Grand Tour of all; he won here last year by just over two and a half minutes. After 69 hours, 17 minutes and 59 seconds in and out of the saddle, he’ll reach Madrid with 24 seconds on Carapaz, Carthy just 47 seconds back in third - the closest trio of finishers in the Vuelta in over 20 years, and the first time ever that all three Grand Tours finished with the leading three riders with less than a minute between them. All while Martin just ran out of hard road.