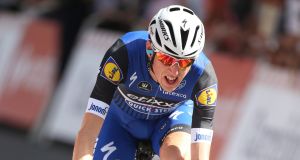 One year after finishing third overall in the Critérium du Dauphiné, Dan Martin returns to the mountains in the race on Friday vying for another strong performance.

His podium finish in 2016 preempted his best-ever result in the Tour de France, ninth overall, although he could arguably have been fifth or sixth with better-timed attacks in the race.

Since then Martin has continued to work hard to be ready for this year’s event, and is looking for a final morale boost prior to lining out in the Tour in just over three weeks’ time.

The QuickStep Floors rider has ridden solidly thus far in the Critérium du Dauphiné, although he lost time to the other overall contenders when he finished 26th in Wednesday’s time trial. He was one minute 18 seconds behind the winner Richie Porte (BMC Racing Team), who moved to second overall and is currently the favourite for the overall win.

Martin is 18th overall heading into Friday’s stage, one minute 45 seconds behind the current leader Thomas De Gendt (Lotto-Soudal). The remainder of the race is mountainous, though, and he is expected to move up the standings as a result.

Compatriot and first cousin Nicolas Roche is also riding well. He is 16 seconds and three places ahead of Martin, but will almost certainly be required to ride for BMC Racing team-mate Porte in the remaining stages. Roche has a domestique, or helper, role in this event and the Tour de France. He hopes to have his own opportunities in other races, including the Vuelta a España.

Meanwhile Sam Bennett finished a solid tenth in the Grand Prix du Canton d´Agovie in Switzerland on Thursday, showing that he is recovering well from the Giro d’Italia. He was not in an ideal position for the sprint, starting from too far back.

He will miss this year’s Tour de France, but hopes to ride the Vuelta.

At home, a series of races will be run in Smithfield Square, Dublin 7 on Sunday. The events are part of National Bike week and are organised by Dublin City Council.

Named StreetVelodrome Dublin City, the races are free to participate in, although early registration is advised. The event will also host the first round of the Viking StreetVelodrome Series at 2pm, a competition which sees professional riders competing for gold, silver and bronze medals at events held across the UK and Ireland.