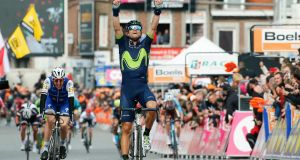 Dan Martin put in a superb performance in Liège-Bastogne-Liège, going close to repeating his race victory of 2013. The Irish QuickStep Floors rider attacked on the uphill climb inside the final kilometre of cycling’s oldest Classic, overhauling breakaway rider Davide Formolo (Cannondale-Drapac), but was caught with less than 300 metres to go by Alejandro Valverde.

The Spanish Movistar competitor launched his sprint and while Martin tried to respond, Valverde held him off to take his fourth victory.

The result was a replica of Wednesday’s Flèche Wallonne, where Valverde won ahead of Martin.

Martin has a strong history in Liège-Bastogne-Liège, netting fifth in 2012, winning in 2013 and looking set to triumph again the following season. He crashed on the final corner, missing out on the chance, and was a non-finisher due to another crash the next year.

However he was one of the strongest in this edition, and would have won without Valverde in the race.

Martin was active in another move in the finale and while that was brought back, he waited and then surged on the final climb.

After Wednesday’s race he spoke of his frustration with Valverde’s form and the difficult in beating him. However he said prior to Liège’s start on Sunday morning that it was a much more open event.

He felt the nature of the course would provide more opportunity, but Valverde marked the Irishman in the finale.

The Spaniard said that he was well aware of the danger. “Martin went very strongly,” he said. “I calculated my distance and decided I could go 500 metres from the finish. It was my time, I never doubted. I was able to catch Martin, take a breath for five seconds, and then sprint to the finish.”

Martin said that he accepted the outcome. “We did a great race and we were beaten by someone better. On Wednesday, I was not happy with myself because I thought I mage a mistake but today very I’m very happy with the way I rode, and the team too.

“They rode out of their skin for me. I went for a strong attack in the finale. I waited for the moment Alejandro was a bit boxed in. I thought I’d catch him by surprise. I gave my all. Once he came past me, I just hoped there was nobody else coming.”

While he wanted to win, he recognised Valverde’s strength. “Of course it would be better without Alejandro but it’s never a frustration to be beaten by someone stronger. It’s a great result and it’s a great way to finish the Classics for the team. It’s been an incredible first part of the season.”

The Ardennes Classics were Martin’s big goals for the spring and while he didn’t land a victory, two second places show his strength. He will now build up for the Tour de France, his top season target. He was ninth overall last year and believes he can make further progress this time around.