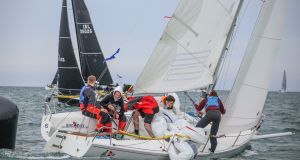 The inaugural Dún Laoghaire Cup, billed as Ireland’s only “dedicated sportsboat event”, will be staged by the Royal Irish Yacht Club for six classes on May 16-17.

While some waterfront aficionados may question the sportsboat tag of some competing marques, there can be no doubting the enthusiasm for the club’s decision to raise the bar once more for one-design keelboat sailing on the Bay.

Up to six races are planned over windward-leeward or trapezoid courses in a jamboree for initially up to 50-60 boats.

There’s a good reason behind it, with more than eight one-design keelboat classes active in the Bay area. The event could appeal again to Squibs and Flying fifteens too, both of which were former Baily Bowl participants. Likewise, it could also appeal to Belfast Lough’s RS Elite fleet, a regular visitor. Suggestions about including the restored Dublin Bay 21 fleet have also been made.

Dublin solo sailor Gregor McGuckin has been named a winner of one of the Cruising Club of America’s top awards. McGuckin (32) is the winner of the Rod Stephens Seamanship Trophy for extraordinary efforts to aid a competitor in the 2018 Golden Globe Race.

The Rod Stephens Seamanship trophy will be presented on March 6th at the club’s annual awards dinner at New York Yacht Club.

McGuckin attempted to rescue fellow competitor Abhilash Tomy in the 2018-2019 Golden Globe Race. Ninety miles apart, McGuckin and Tomy were both dismasted in the same hurricane-force storm in the Southern Ocean, and Tomy was seriously injured. McGuckin jury-rigged his boat and sailed to within 25 miles of Tomy to help. Although a French fisheries vessel, FPV Osiris, was able to reach Tomy first, McGuckin’s seamanship and courage were judged to be of the highest order.

Sonia O’Sullivan portrayed a worthy team endeavour in her column from Melbourne in this newspaper this week when she met up with the four Irish Radial girls on the eve of an Olympic trial as part of the Radial World Championships but, make no mistake, there will be no quarter given when the first gun sounds on Sunday. Olympic silver medallist Annalise Murphy, fresh from her silver medal at Sail Melbourne in January, Aoife Hopkins, Aisling Keller and Eve McMahon are all lined up as part of the 140-boat fleet at Sandringham Yacht Club. It is the first event of three to decide who will represent Ireland. The other two trial regattas are the Trofeo Princesa Sofia in Palma in March, and Hyeres Regatta in April.