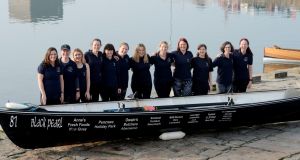 Members of the St Michael’s Rowing Club who will defend their title in the Celtic Challenge rowing from Arklow to Aberystwyth, a 155 km journey taking between 20 to 24 hours for the rotating crew of 12 to complete. Photograph: Alan Betson

Arklow to Aberystwyth. As simple as that.

Four rowers and a cox in a long boat striking out to cross the Irish Sea. It’s frills free. It’s a roll up the sleeves challenge, a test of those body parts and places in the mind people don’t often go.

Two years ago the crossing became more of an epic journey. With 13 boats taking to the open sea and the weather turning sour, nine did not finish, retiring in the face of brutal conditions. Four boats endured. The all-women crew from St Michael’s Dún Laoghaire were one of those. They are back again this year.

You can hear them and see them from the town’s piers on quiet windless evenings. The noise of the pull and clump of the oar, the swirl of water around the blade, the synchronised unzipping of energy and the chatter of the cox hunkered down in the back directing the boat and the rowers, cutting across Scotsman’s Bay towards Joyce’s Tower and the 40 foot.

As Liz Doyle describes it, her rowing is a mixed bag of things – all of them delivering sanity and peace in a world that sometimes tears along too furiously. Rowing, she says, is a mender. It is mental health ticket and physical exercise. It is friendship and shared goals. It is teamwork and that weird feeling when your efforts help others.

It is the fixed seats and reaching forward to draw the oar, not too shallow, not too deep and the confirmation that gives, each successfully completed pull itself a minor triumph. It is hauling the boat into the shed in the dark. It is going back to her five children a better mother than when she left them.

“I took up rowing in my late 30s, early 40s,” she says. “I joined four years ago. The minute I sat in the boat I said ‘Oh my god I’ve found my sport’. Love it. It has opened a whole new world for me. It’s like yoga in a boat. Mind, body and soul. There’s no phones. There’s no social media. You get in that boat and all you do is concentrate on rowing. It clears the head.

There was something about the hardship they suffered together on the last race that has brought them back wanting more of it. She says they could see other boats around them pulling in to take refuge and the solemn process of the outboard motor boats, the ribs, arriving over to their boat to inquire whether the women crew wanted to stop too. They wanted to say yes but said no. They wanted to stop but kept going.

That ability to endure and their refusal to bend drew them closer and it opened eyes to the notions of again winning the race this year.

“Despite the severe weather conditions we completed the challenge,” says Liz. “Nine boats retired. We were unbelievably strong and got to the end. This team of 12 women will actually row their asses off. Literally.

“We set out from Arklow and it was a sunny day. As soon as we got into the race and started rowing through the night the weather changed and conditions were really rough. There were high winds and water was coming in the boat. There were side on winds so we had to row really strong. At one point we managed to do only one kilometre in an hour when our average would be eight, nine, 10.

“That’s how difficult it was. There was pure determination. Fear didn’t come into it. All I wanted was to win that race. Twelve women had trained for three to four months. The determination and tenacity of those women. I’ll never understand how amazing they were. We were never giving up.

There’s a cadence to the movement and the sound, the boat reacting less to muscle and effort than to rhythm and efficiency. Sometimes on their training runs they turn left outside the walls of the pier and row towards Monkstown and Blackrock parallel to the DART line.

The rest period requires the crew to clamber from the long boat into a rib, which takes them to the support boat where they take time out before slotting into the routine again. How often teams swap rowers and how people are utilised is all part of the tactics of the race. The Dún Laoghaire crew runs in age from teenager to late 40s.

“You have to go look for the water and you have to find the water in that stroke,” says Liz. “You don’t miss a stroke. I’m always looking at my oar to ensure I make the most of every stroke. Be efficient. Maximise every stroke is what the cox is saying.

“Pull the longest stroke. Lean forward and reach and make a pull from there to there. The longer the stroke the faster you go. Obviously it’s all timing. There’s a catch on the boat. You have to listen for the catch.

“The four oars have to be going together. It’s like dough, dough,” she says knocking the table. “Everyone all at the same time. You just fall into it. You sync together as a crew. It’s unbelievable how you sync. It’s technique. Totally technique. Our long boat female crew could easily beat a crew of men.”

On Good Friday they did a long row in Dún Laoghaire to simulate the race. There are four people rowing at any given time with an oar each, the stroke pair to the front and the bow pair to the back.

“I sit at the back in the bow,” says Liz. “That’s where all the water comes in. It’s like a fountain there. The bow pair get the wettest. I’m in the back because I’m strong. You have to be strong in the back to pull the boat around. The bow pair pull the boat around. The stroke lead the pace. You follow the stroke. You have to have a consistent stroke and if you have a consistent stroke with power you’ve got it.”

Another Liz, Liz O’Toole vomited last time from sea sickness. She has signed up again. Nicola Fitzgerald and Amy Smith are the two leading women. Nicola has huge experience. Amy is always thinking ahead, always doing diagrams. Simone comes from Romania. She was walking down the pier, saw the boats and was captivated. Two years later she is rowing to Wales. They had a girl called Enya last time who used to sing. Yes she did. She actually did sing ‘Sail Away’ (Orinoco Flow).

“Rowing in the dark. You are in the middle of the sea. There’s no horizo

Run every two years, they called the race off in 2016 and it went ahead again in 2017. The Dún Laoghaire crew won it. Now they want to retain their title. They want to beat the time. It’s a shared team experience and life affirming. But they are competitive. The winning is important.

It is an extreme test of endurance. They stroke out of the harbour in the afternoon with all teams rowing throughout the night, some of them arriving in Aberystwyth in early morning depending on weather conditions.

“Rowing in the dark. You are in the middle of the sea. There’s no horizon,” says Liz. “ It isn’t easy and you’re wet and you’re cold. All you are doing is following a point and rowing. Your support boat is telling you stuff.

“At one point I was coxing and I remember getting a message over – ‘you are rowing back to Ireland, turn the boat around’. So yeah it’s all about getting there in one piece and rowing the best you can. After 10 or 11 hours it becomes all about grit and determination.”

It began with a sponsored row in 1988 by the Aberystwyth lifeboat crew and is now called the Celtic Challenge. The Dun Laoghaire women don’t have a fibreglass longboat so they went to Wales and borrowed one. The race, they say, is simply delivering it back to Pembrokeshire in one piece.

“You do get tired,” admits Liz. “But mentality takes over. Tiredness does not come into it. You just keep going. Once you are warmed up you could row for ever. You really could. You can feel when the boat moves. You could go and go and go and go . . ."