Cycling: Rás Tailteann postponed to future date due to coronavirus 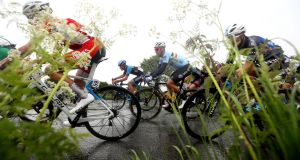 Action from stage eight of the 2018 Rás Tailteann from Naas to Skerries. Photograph: Bryan Keane/Inpho

The organisers of the Rás Tailteann have become the latest sporting group to put plans on hold due to the coronavirus pandemic. The race was due to begin in Dublin on Wednesday, June 10th and conclude in Blackrock, Co Louth on Sunday, June 14th but the organisers have now decided to shelve it until later in the year.

Race director Eugene Moriarty confirmed the decision, saying that it was a necessary and responsible step. “Considering the nature of the public health emergency Ireland and the world is currently dealing with, and the progressive evolving nature of the Covid-19 pandemic, Cáirde Rás Tailteann has decided that it is in the best interests of everyone associated with the event and the wider public to temporarily postpone the 2020 event.

“The decision to postpone has not been taken lightly, but when we consider the on-going restrictions that are in place, the current workload of An Garda Síochána, county councils and the health service, all of whom play integral roles in an event of this stature, we feel it is only appropriate that planning for the 2020 Rás does not add to the immediate burden faced by our critical frontline public servants.” It is hoped that the race will take place at some point after July.

The Rás is Ireland’s toughest and most prestigious cycling event and was first held in 1953. It has already experienced considerable disruption in recent years. Previous sponsors An Post stepped back after the 2017 edition but the race was able to go ahead the following year due to a reserve fund. However, that was exhausted afterwards, and the unsuccessful hunt for a new backer meant that last year’s event was cancelled. It was the first such cancellation in the race’s long history.

Together they decided to remove it from the UCI international calendar. This both cut the costs and made it more accessible to Irish county riders, who found it more difficult to realistically target stage wins and the overall classification in recent years.

Those competitors and likely entrants from the UK and elsewhere will be relieved that the race has been postponed rather than cancelled. The organisers made clear that they hope it will still take place. They said that they “will continue to work with Cycling Ireland to promote the event on any suitable date that may become available before the end of the 2020 season”.

The current plan is to reassess the situation in the first week of June and release a formal update thereafter.

Campbell said that the intention is to follow the same stage details as were unveiled in early March. “We do not foresee any changes to the route that has been published, so it will be a matter of managing any changes that may be necessary in relation to a change of dates,” he said.

“This is of course contingent on any opportunity that may become available to put the Rás safely back on the roads of Ireland later in 2020, if the prevailing circumstances would allow and most importantly that it is safe to do so.”