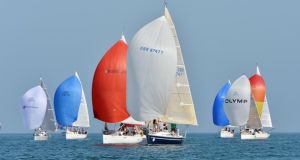 Competitors with their Spinnakers up in the opening race of the Volvo Dún Laoghaire Regatta on the North Course. Photograph: Alan Betson/The Irish Times

Glorious conditions, tempered only by a lack of significant breeze on Dublin Bay, marked the start of the four-day Volvo Dún Laoghaire Regatta yesterday afternoon.

It is what the principal race officers around the six courses in use for the fleet had to contend with and what should reach 400 boats today, and the programmed single race was delivered against the odds.

There were testing and, at times, testy conditions, especially at busy mark roundings where converging boats jockeyed for clear water.

A building ebb tide running against a weak sea breeze proved as challenging as fresher conditions might have done.

And so the opening salvos across 26 classes were fired.

From the Class Zero, Norbert Reilly’s Crazy Horse from Howth Yacht Club flew the flag for what passes for an Irish fleet in these post-tiger years and notched up the opening race win in a largely visiting fleet that has surpassed any other event in these waters so far in 2013.

But this series is certain to offer plenty of challenges to come for the northside crew, though one of their regular challenges did surprisingly poorly in the first race of the regatta.

After a good start and first beat, one small error for Richard Fildes’ Impetuous sailing downwind led to getting mixed up with other boats and the Corby 37-footer from Wales slipped down to 10th place.

‘No excuse’
“No excuse, we just didn’t sail very well,” said Maurice “Prof” O’Connell of North Sails Ireland, who is competing on board.

There were no errors for the Irish Class One champion boat yesterday as X-Yacht Bon Example set down a marker that the winning ways in Fenit last month would continue on Dublin Bay.

Paul O’Higgins’ Rockabill V from the Royal Irish Yacht Club, arguably the best of the home fleet placed third in a modestly strong start to the series though the class leader may have a boat-speed edge in light airs.

There were no surprises in Class Two where Nigel Biggs Checkmate, another winner of an Irish title in Kerry last month continued a set of straight wins at Tralee Bay Sailing Club with another bullet yesterday.

Light airs made placing tricky and almost lottery-like at the mark roundings which saw Anthony Gore-Grimes Howth entry Dux, class winner at the recent Sovereigns Cup in Kinsale place eleventh in this 26-strong class, one of the largest this week.

Barry Cunningham and Jonathan Skerrit’s Quest, a revived class quarter-tonner from the Royal Irish Yacht Club topped the 23 strong Class 3 fleet but is being pursued by a clutch of J24 one-designs led by Howth’s Under 25 crew on Kilcullen Euro Car Parks.

Amongst the J109 one-designs competing for their national championships, John Maybury’s Joker II with Olympic veteran Mark Mansfield on board led the opening day of this 14-boat class.