Ruaidhrí Croke at The Aviva Stadium

In a week where Irish-American relations may have soured somewhat thanks to a certain ruling by the EU Commission regarding a certain American technology giant’s tax affairs, a very Irish welcome was given to the fans, players, marching bands, cheerleaders and general hangers-on of both Georgia Tech and Boston College for the Aer Lingus College Football Classic at the Aviva Stadium.

That welcome was a gloomy Autumn day on Dublin’s southside where the rain persisted for the duration of a sporting event Ireland is not used to.

In truth this wasn’t so much a sporting event as a festival of Irish/American culture with the celebrations beginning last Thursday and surely continuing long into Saturday night in the pubs and clubs of Dublin.

While any American CEOs in the 40,000-strong crowd for the opening NCAA game of the season may have looked slightly sceptically at the IDA Ireland banner on the Havelock Square end inviting them to “Touchdown in Ireland, where it’s great to do business”, proceedings went off without a hitch on what was a spectacular occasion. At the end it was the Yellow Jackets of Georgia Tech who were celebrating a 17-14 victory after a dramatic finish to the fourth quarter.

Both sides arrived in Ireland in need of a strong start to the season following disappointing campaigns last year. While Boston College felt more like the home team thanks to their Irish connections - the private university was set up in 1863 by Jesuit John McElroy who hailed from Enniskillen - the Yellow Jackets of Georgia Tech were well represented by thousands of fanatical fans.

And yes, these fans are fanatical about college football. Both sides attract average attendances of about 45,000 for home games and that’s quite mediocre compared to some of the bigger colleges across America. To sum it up: the 10 largest stadiums in America (in any sport) are all home to college football teams. The coaches of both Georgia Tech and Boston College - Paul Johnson and Steve Addazio - are paid $2.5million a year and the pair languish around 35th place in the list of highest paid college football coaches.

The passion is intense, the rivalry fierce. It was easy to pick out the curious Irish onlookers in the crowd trying to get to grips with how people could feel such affiliation to institutions they most likely never attended. In college these men are gods and, to the legions of fans, they maintain a similar status. There was enough official merchandise on show to fill a small shopping centre. Those who have reached a certain level of fanaticism were distinguished by bright ‘Super Fan’ t-shirts.

The fans’ intensity became clear early on when I was warned that Georgia Tech must always be referred to with the ‘Tech’ part included and never simply as ‘Georgia’ - that being the name of their fiercest rivals University of Georgia. Apparently it’s something akin to referring to Manchester United as Manchester City. 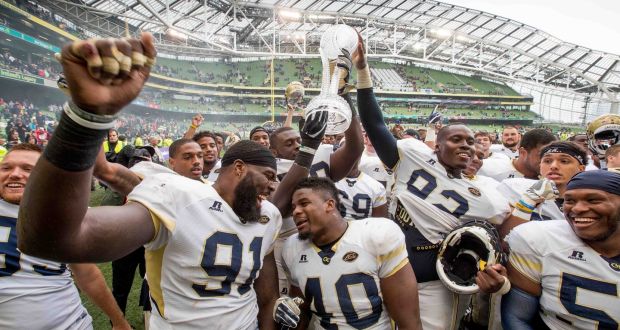 The impressive pre-game show got underway well before kick-off with the marching bands and cheerleaders of both colleges facing off with their routines. The Boston College Screaming Eagles rendition of ‘Shipping Up To Boston’ was a particular highlight and further ensured that every facet of the day was dripping with stereotypical Irishness.

The two teams shortly after came sprinting onto the pitch in a haze of firework smoke and led by charging flag bearers. The stadium erupted, there was endless high-fiving and chest bumping and the respective mascots - Buzz the Bee for Georgia Tech and Baldwin the Eagle for Boston College - busted a few moves to Taylor Swift and U2.

One of the most staggering aspects of the whole occasion is the sheer logistics involved in each team bringing around 90 players, full marching bands, cheerleaders, coaches and other personnel all the way from America to Ireland for a single 60-minute long match.

After renditions of Star-Spangled Banner - performed by The Bostonians - and Amhrán na bhFiann - performed by the Irish Children’s Choir - a game of American Football finally broke out.

But it would easy to spend most of the time not watching the actual game on show thanks to the endless action on the sidelines. Both marching bands and cheerleading teams strike up at every stoppage in play. And there are a lot of stoppages in American Football.

On top of that, every once in a while the official on-field MC - TJ Hartmann - would entertain the crowd with such things as presenting the ‘VIP Family of the Day’ who wave to the crowd before trooping back to their VIP box.

A particular favourite seemed to be the ‘Dance Cam’ where TJ would invite the crowd to “get up and show us your moves” to the tune of Uptown Funk.

The Yellow Jackets opened the scoring 12 minutes in when Justin Thomas found Matthew Jordan in the endzone. Scores were thin on the ground as the rain continued to fall but that did not dampen the half-time show which was a special commemoration of the 1916 Rising.

As a side note: the cheerleading teams from both colleges should be given a lot of credit for coming up with dance routines to match ‘The Fields of Athenry’.

However, perhaps it was that which inspired Boston’s second half comeback as Jon Hilliman levelled the scores with a superb 73-yard run for a third quarter touchdown before John Johnson put his side ahead in the final quarter.

Harrison Butker pulled three points back late on for the Yellow Jackets with a field goal but it looked like it wasn’t going to be enough as the seconds ticked by.

But then, with just 35 seconds left on the clock, the Yellow Jackets made one final attack count as Dedrick Mills dived into the endzone from four yards out to steal the win.

The yellow wall on one side of the Aviva Stadium erupted in noise as the 70 or so other players, coaches and cheerleaders streamed onto the pitch in celebration.

It was a dramatic finish to a game which hadn’t promised much until the final quarter but now might just have attracted some new Irish fans to a sport that’s continuing to grow in popularity on this side of the Atlantic.

And hey, €13 billion would probably be enough for Ireland to buy its very own NFL franchise.

Shane Lowry and Rory McIlroy to represent Ireland at Olympics

The GAA’s strangest days – Chronicles of a Time of Covid

Kevin McStay: Kerry have the depth and firepower to match Dublin

1 Shane Lowry and Rory McIlroy to represent Ireland at Olympics

3 Darragh Ó Sé: Teams will exit championship because they were not properly tuned in

The GAA’s strangest days – Chronicles of a Time of Covid

Kevin McStay: Kerry have the depth and firepower to match Dublin