Contador closer to Vuelta a España title as rivals crack 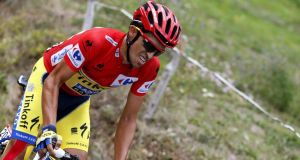 Alberto Contador of the Tinkoff Saxo team on his way to winning yesterday’s 16th stage of the Vuelta a Espana. Photograph: EPA/Javier Lizon.

Alberto Contador moved closer to a third Vuelta a España title by winning Monday’s 16th stage while his closest domestic rivals cracked on the final climb.

Tinkoff-Saxo rider Contador then powered away with 1.5km left as he finished 15 seconds ahead of the Briton to tighten his grip on the red jersey.

Froome, who started the day fourth overall, is now only three seconds behind second-placed Valverde. Contador leads compatriot Valverde by 1:36 and Froome by 1:39 with Rodriguez fourth, 2:29 off the pace.

“I knew when to wait for my chance and I was able to widen the gap to all the riders including Froome who kept up an incredible rhythm,” Contador told reporters.

“I was feeling strong, I hung in there, saw my opportunity and made the most of it. I saw that Purito [Rodriguez] and Valverde were left behind and I knew it was an important day,” said Contador.

“You cannot take your eye off Froome. Thankfully I was able to keep up with his changes of pace.”

Froome attacked with 4km to go in the 16.5km ascent to La Farrapona, and only Contador was able to match him.

Valverde and Rodriguez could not follow and had to settle for fourth and fifth position respectively in the stage behind Italy’s Alessandro De Marchi, the strongest rider of the day’s breakaway.

Italian Gianluca Brambilla and Russian Ivan Rovny traded punches without getting off their bikes and were thrown out of the race.

Local media reported that a police motorcyclist was killed in a crash during the stage.

Riding well despite his big crash on Sunday plus the resulting stitches in his shin, Dan Martin continued his upward progress on the toughest stage of yesterday.

Fellow Irishman Philip Deignan also rode well on the final climb, driving the pace at the front in order to set up Sky leader Froome for his decisive attack. Deignan’s push was however cut short by a front wheel puncture, after which he rode in for 37th place.

Martin improved from seventh to sixth overall when the rider who had been in the latter position, Rigobert Uran (Omega Pharma Quick Step) cracked and lost time, slipping to 16th overall. Deignan is 44th. Both will aim to recover during today’s rest day, then ride strongly in the remaining five days of the race.

Ireland complete clean sweep of South Africa 21:19
Huw Jones says Scotland players ‘not that bothered’ by Russell’s departure 20:49
Kobe Bryant crash: Questions emerge about why helicopter was flying in fog 19:41
Ireland predicted to win its best ever Olympic medal haul in Tokyo 19:35
Donegal’s Leo McLoone retires from inter-county football 19:24
Here is your handy guide to sport on television this week